Another Racial Incident At A Wal-Mart

I've never been a big fan of Wal-Mart due to some problematic racial and gender discrimination incidents in its recent past.

Black customers have complained of being treated unfairly at Wal-Mart stores or had jacked-up stuff happen to them there.

Sonya Matthews was shopping in a Georgia Wal-Mart with her irritable two year old daughter Paige when Roger Stevens walked up to her and slapped her child four to five times.

In another ugly incident that took place in a Kennett, MO Wal-Mart store, honor student Heather Ellis faced 15 years in prison for allegedly cutting in line until a plea deal was struck. It got so bad at one point the Klan stuck their pointy hoods in the mess and threatened Ellis' family.

The company faced lawsuits alleging that women were passed over in favor of men for pay raises and promotions. 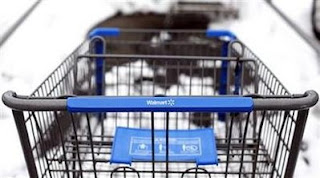 In February 2009, Wal-mart paid $17.5 million to settle a class action lawsuit alleging racial discrimination in its hiring of truck drivers.

It's currently facing a lawsuit filed in May 2009 by the U.S. Equal Employment Opportunity Commission on behalf of Latino/a employees that claims that employees at a Sam's Club subsidiary in California were subjected to a hostile work environment.

The suit alleges managers failed to stop repeated verbal harassment, including the use of derogatory words, against Latino/a descended employees.

But the latest one involves a Washington Township, New Jersey Wal-Mart in which a male voice came on the store PA system shortly before 7 PM EDT on Sunday and calmly announced, '"Attention, Wal-mart customers: All black people, leave the store now."

Shoppers in the store at the time reported a manager quickly got on the public-address system and apologized for the remark, but the damage was already done as customers expressed their anger to store management. 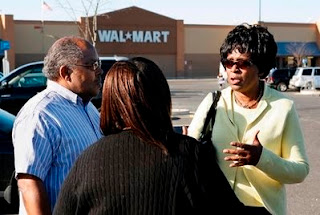 "I want to know why such statements are being made, because it flies in the face of what we teach our children about tolerance for all," said Sheila Ellington, who was in the store at the time with her friend Patricia Covington. "If this was meant to be a prank, there's only one person laughing, and it's not either one of us."

"We are just as appalled by this incident as our customers," Wal-Mart said in a statement. "Whoever did this is just wrong and acted in an inappropriate manner. Clearly, this is completely unacceptable to us and to our customers."

It's still unclear at this time whether it was a rogue shopper or an employee who was responsible for the comment and the store security tapes are being reviewed to find out the answer to that question.

But one thing that's clear is Wal-Mart has another racial PR headache on its hands.
Posted by Monica Roberts at 10:01 AM