Got Census Form? Fill It Out And Send It Back! 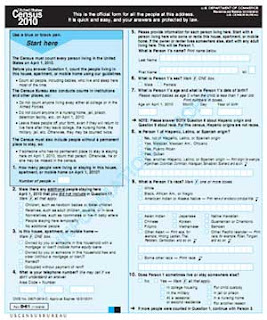 A dew days ago I received my 2010 Census form in the mail. Being that I spent a summer working as an enumerator for the 1980 Census this decennial population count has some sentimental value to me.

But I'm also aware that one of the major reasons why we do it in addition to wanting to know exactly how many peeps we have living in the states is wrapped in politics.

Congressional districts are determined by population. The more peeps you count, the more congressional seats your state gets.

That's also true about federal funding as well. The more people in your area that turn in the forms, the more of your federal tax dollars you mget back for local projects.

There's also one other benefit of it as well that you won't see for 72 years, but your ancestors will.

When I was researching my family history back in 1998, the 1920 Census data had just been released for public perusing. I was at the Clayton Genealogical Library poring through Fort Bend County data looking for my great great grandmother's name.

I then realized after two hours I needed to look in the 1910 census data for Fort Bend County, and began sifting through it.

I found what I was looking for 30 minutes later, and I began to cry when I did so.

It was another piece in my family history puzzle, and it came thanks to perusing census data.

So fill it out the census form and send it back. Not only will your community and state thank you for it, your ancestors will 72 years from now.
Posted by Monica Roberts at 5:00 PM