Happy Birthday To The Queen Of Soul! 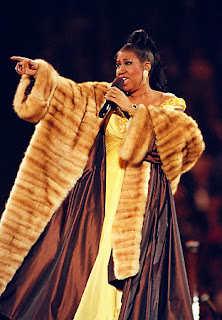 Time for everyone to bow and curtsy in the direction of Detroit because today is the birthday of Her Royal Soulness, Aretha Franklin.

She has had a long and distinguished career in the music industry, winning 18 Grammys. She was the first female artist inducted in the Rock and Roll Hall of Fame in 1987, and has had 20 No. 1 hits on the Billboard R&B Singles Chart, starting with 'Respect' (one of my fave songs) in 1967.

She became on June 28, 1968 the second African American woman to appear on the cover of Time magazine.

She has also garnered a long list of honors culminating in being named the Number one singer in the rock era by Rolling Stone magazine. She beat out Number 2 Ray Charles, Number 3 Elvis Presley, Number 4 Sam Cooke, and number 5 John Lennon for the honor..

She was awarded the Presidential Medal of Freedom in 2005 and sang at President Barack Obama's inauguration in 2009. The hat she wore that day is now housed in the Smithsonian.

PETA may not like the Queen of Soul, but who cares what they think? The rest of the planet loves and respects her.

Happy Birthday, Aretha!
Posted by Monica Roberts at 8:00 AM