Bye Vancouver-See You In Sochi In 2014 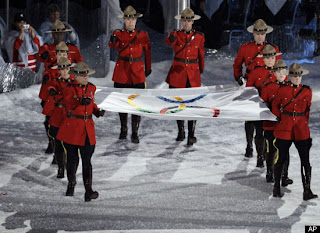 The XXI Winter Olympics concluded yesterday with the closing ceremonies being held at BC Place.

Despite Vancouver's games getting off to a tragic start with the death of Georgian luger Nodar Kumaritashvili during a practice run hours before the opening ceremony, they spent the next sixteen days of competition building toward a triumphant climax.

I concur with IOC president Jacques Rogge's remarks. Vancouver did a wonderful job hosting the games and as always, I'm sad to see any Olympics end.

While the host Canadians are keeping an Olympic record 14 gold medals, Team USA is taking 9 golds and 37 total medals south of the 49th parallel. It's the best total Winter Olympics haul we've had since the 1932 Lake Placid Games and broke the record set by Germany at the 2006 Torino Games.

All eyes will be on Sochi from February 7-23 in 2014, to whom the winter Olympic hosting torch was passed. While we're waiting for the start of Russia's first winter Olympics, next year in Durban, South Africa the IOC will determine which city gets the nod to host the 2018 winter games.

The 2018 contenders are PyeongChang, South Korea, who is making their third winter Olympic bid and has finished as the runners-up to eventual 2006 and 2010 winners Torino and Vancouver, Annecy, France, and Munich, Germany. If Munich's winter bid is successful, it would become the first city to host a winter and a summer games.

Fear not, Olympic junkies. Singapore will be hosting the first ever Youth Olympic Games this summer. They will be held from August 14-26 and will feature athletes aged 14 to 18 competing in the same events that are contested in a Summer Olympic Games. There will also be a Youth Winter Olympic Games as well contested in 2012 with Innsbruck, Austria hosting it.

Both should be interesting to watch and keep us Olympic junkies happy until London 2012. In the meantime, it's going to be an interesting four years between now and 2014.
Posted by Monica Roberts at 12:10 AM