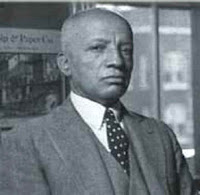 February is when we take the time to shine the spotlight on our past, present and future history makers. Judging by recent events on several college campuses, Black History Month couldn't have come at a better time.

But no discussion of Black History Month can take place without taking a bow to the man who almost singlehandedly willed it to happen, Carter G. Woodson.

The son of former slaves whose vision of celebrating our history through annual events and a prestigious journal became a reality, was born on December 19, 1875 ten years after the Civil War ended. He taught himself the fundamentals of math and English and at 19 entered high school in Huntington, West Virginia. He mastered the four year curriculum in less than two years and at age 22 spent time at Kentucky's Berea College before returning to the coal mines.

In between trips to the mine shafts he studied Latin and Greek, then moved on to receive his bachelor's and master's degrees at the University of Chicago. He matriculated at Harvard University and became the second African-American to earn a doctorate in history.

Then the man who earned a doctorate in history proceeded to make it. On September 9, 1915 he and four other men founded the Association for the Study of Negro Life and History (now called the Association for the Study of Afro-American Life and History). On January 1, 1916 he used his own money to print the first edition of the prestigious Journal of Negro History. After serving as a dean at Howard University and West Virginia State he left teaching and published one of Black history's major books, The Negro In Our History. He also started on February 7, 1926 the annual Negro History Week celebrations that evolved in the 1960's into what we call Black History Month. Dr. Woodson considered it his proudest achievement.

Dr. Woodson believed that you look back in order to look forward and like many pioneers ignored the naysayers to make his dream a reality. He had an unshakeable faith in the power of Black history and believed that "the achievements of the Negro properly set forth will crown him as a factor in early human progress and a maker of modern civilization."

It was also what we'd call in our generation a FUBU (For Us By Us) production. While Dr. Woodson's foundation did receive some contributions from three white foundations in the 1920s, those funds dried up when the white culture structure, led by power broker Thomas Jesse Jones, objected to Woodson's policy of "telling the whole truth and nothing but the truth regardless of whom it affected."

According to Dr. Woodson, a clandestine effort was launched to erode support for the Association. He describes what happened by stating in a 25 year report, "One interracial agency," he wrote, "assuming the authority to dictate the leadership of the Negro race in all matters in America and in Africa, became most vicious in its attacks. This agency prepared a memorandum setting forth the reasons why the Association for the Study of Negro Life and History should not be further supported and clandestinely circulated it to lop off the supporters of the Association. Finally, it had the effect of depriving the Association of the assistance of all foundations and the rich people who had formerly assisted the undertaking."

Undaunted, the foundation survived on Dr. Woodson's teaching income, book royalties, and soliciting support directly from the Black community. That this occurred during the Great Depression is an even more remarkable testament to the iron-willed determination and effort that Dr. Woodson undertook to keep his dream alive.

The legendary Dr. Woodson died on April 3, 1950 at the age of 74. His outstanding historical research influenced other persons to carry on his work such as historians John Hope Franklin, Charles Wesley, and Benjamin Quarles. My late godmother Pearl C. Suel was president of the Houston chapter of Dr. Woodson's organization and wrote the African-American history curriculum for the Housron Independent School District. She passed on her passion for history not only to my mother but myself as well.

Dr. Woodson often said that he hoped the time would come when Negro History Week would be unnecessary and all Americans would willingly recognize the contributions of Black Americans as a legitimate and integral part of the history of this country. Sadly, American society has not yet fully evolved to that point and the teaching of Black History is needed now more than ever.


Whether it's called Black history, Negro history, Afro-American history, or African American history, his philosophy made the study of Black history a legitimate and acceptable area of intellectual inquiry. Dr. Woodson's vision has given all African-Americans a profound sense of dignity and pride in our heritage.
Posted by Monica Roberts at 7:32 AM