For Women of Color, A Fuller Beauty Standard 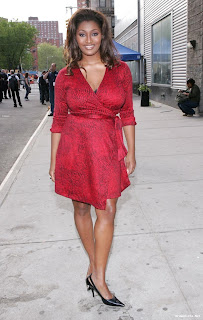 The voluptuous actress Jennifer Hudson wears a burgundy satin dress on the cover of the March issue of Vogue magazine, where she has been photographed by Annie Leibovitz and lionized by Andre Leon Talley. In the cover image, she leans slightly forward and her mouth is open as if she were captured in the middle of a song. Hudson, one of the stars of "Dreamgirls," is not the usual fragile-framed celebrity or model that one typically finds starring in an issue of Vogue.

March is not Vogue's "shape" issue, its yearly nod to women whose body type does not fit the fashion standard. It would not be particularly surprising to see her there. Instead, Hudson, who went from a reality show castoff to Oscar nominee, is the logical but unexpected star of the fashion bible's enormous "power" issue, which also celebrates women such as House Speaker Nancy Pelosi and the model-turned-philanthropist Natalia Vodianova. Hudson is not photographed wearing her own clothes, the technique often applied to glamour-shy politicians and real people too big to fit the samples. She gets the full fashion treatment, Carolina Herrera dress and all.

The Sports Illustrated swimsuit edition also has a cover model known for her generous curves: singer Beyoncé Knowles. Although one should point out that her figure is generous only by the standards of Hollywood and Seventh Avenue. Most everyone else would simply describe it as "wow." Knowles, who was also in "Dreamgirls" is kneeling in the sand in a yellow and pink bikini.

The magazine also invited talk/reality show host Tyra Banks, who famously posed on the cover of the swimsuit issue 10 years ago in an itsy-bitsy polka-dot bikini, to re-create that image, according to the Associated Press. Banks was the first black model to appear on the cover alone. 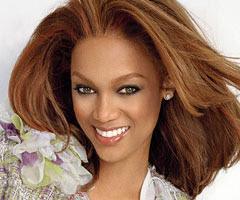 Banks is approximately 20 pounds heavier on her 5-foot-10 frame since that time, a fact that caused so much cyber-sniping that she defended herself by posing as a luscious 161-pound pinup on the cover of People. She is a whole lot of woman now, but she did not diet down to fit into the old swimsuit. Sports Illustrated, clearly understanding that a lot of men like "a lot of woman," just added a little extra fabric to ensure tasteful coverage of the parts that had grown bigger.

These disparate magazines are lauding the booty beautiful at a time when the body standard for models -- and actresses -- has come under scrutiny for being unrealistically and unhealthily thin. While designers in New York were unveiling their fall 2007 collections last week, the industry hosted a panel presentation on the subject of ever-shrinking models who have gone from a size 6 a decade ago to size 2/4 and occasionally 0.

The one thing that connects these three curvaceous women, other than their celebrity, is that they are women of color. On them, curves are acceptable. While women such as actress Kate Winslet, who is white, have talked about not giving in to a Hollywood culture that demands they be super slim, it seems that only African-American and Latina actresses really get away with extra pounds, or even just a round
bottom. See: Jennifer Lopez, Queen Latifah, "Ugly Betty's" America Ferrera and "Grey's Anatomy's" Chandra Wilson and Sara Ramirez.

One could argue that these women, each one quite pretty, are not considered part of the mainstream -- their ethnicity is still a regularly used modifier in their professional lives. They stand just a little apart, so they are exempt from adhering to mainstream definitions of beauty. They set their own standards. But being judged by a different set of rules can be both liberating and vexing.

There may be a greater willingness to accept heft when it is brown or black because it is so much easier to find evidence of black women who are large and proud and take pleasure in their bodies. While so many women -- of all ethnicities -- fret about a modest waistline that protrudes slightly over a pair of low-slung jeans, creating the dreaded "muffin top," there is a group of self-assured women of color who have an entire loaf of bread rising up and over their waistband, and they don't care. Their pudge may not be healthy, but they project confidence and contentment.

There is also the stereotype of the large black woman as the diva-like sexpot: strong, aggressive and entitled. See: the comedian Mo'Nique. There is always the looming danger of taking that caricature into destructive and demoralizing territory -- black women as oversexed, or black women as impenetrable, or obesity as healthy.

But that iconic image has established that big can be beautiful and desirable -- at least when it comes to women of color. Telling a black woman that she has "big legs" -- meaning shapely -- is a compliment, not something meant to send her into training for a marathon.

The larger culture has not bought into that opinion, but it seems to have been swayed. Roundness is more accepted of black women because they are more accepting of their own curves.
Posted by Monica Roberts at 1:48 PM

however...
let wome be women.

The problem is society feels that all women shoukd be size 0's.

Even some African-American women are starting to buy into that assertion.