Beaten but Not Broken, Black Krewes Make a Big Return at This Year’s Mardi Gras Fest 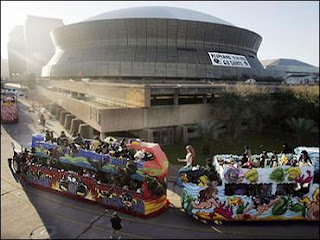 photo-the start of the Zulu parade

When the Zulu Social Aid and Pleasure Club, Inc., steps off at 8 a.m. Tuesday morning to lead the Mardi Gras Day parade, it will cap a major recovery of the black Carnival season in New Orleans.

Last year, Zulu, the premier black parading organization in the Crescent City, managed to put together a parade, despite the displacement of many of its 600 members in the wake of Hurricane Katrina. The city’s smaller black social clubs, which host parties and debutante balls during Carnival, were mostly absent from the scene.

This year, however, the black organizations have made a comeback.

“We came back strong last year, and we’re going to be even stronger this year. The city needed it,” said Alvin Lee, a Zulu member. “It’s time for it.”

Lee said for a true New Orleanean, Carnival festivities leading up to Mardi Gras are just part of the fabric of life.

“Zulu has been in my life since I was a kid,” Lee told BlackAmericaWeb.com. “There’s something about that second line music. It’s in the blood.”

Zulu is the only black organization marching on Tuesday, but the Bunch Club, the Young Men Illinois and the Plantation Revelers were among the traditional black, middle-class organizations hosting soirees.

The groups have had to patch themselves back into the fabric of New Orleans life because so many of their members were displaced by Katrina. Some commuted from Baton Rouge, Houston or places farther afield to participate in Carnival.

According to the New Orleans Chamber of Commerce Web site, there are about 70 carnival groups. “Some are over 100 years old," the site quotes, "but krewes are continually forming and disbanding.”

A check of a Web site that lists contact information for krewes and social organizations revealed that many no longer have active Web sites, have disbanded or have chosen not to participate this year. A number are inactive because it has been too difficult to keep the organizations going with members displaced by Katrina.

“These cultural events are vital to the city,” Keith Weldon Medley, a writer and a member of Bunch, told the New Orleans Times-Picayune. “When we put on our dance, we’re making a statement that New Orleans’ traditions are alive and will continue into the rest of the century.”

“To a true New Orleanean, it’s a way to relax, get your focus, deal with the devastation,” Lee said. “For one day, there is no race. Everybody gets along on this day.”

Lee added that for Zulu, Mardi Gras is just one part of its mission.

“Mardi Gras is one day a year. Zulu is 12 months a year,” Lee said, pointing out that while most people know about the revelry of Mardi Gras, fewer know about the community service the organization provides throughout the year.

“We give out Thanksgiving baskets, we have a college fund. We help people in need. We’re a social aid and fun organization,” Lee said.

Zulu is involved with the Partners in Education Program in the city’s public schools. In fact, Morris F.X. Jeff Sr. Elementary School was named for the first black man to become a supervisor in the New Orleans Recreation Department, a man who also was King Zulu in 1972. The organization also has a scholarship fund that helps students at Dillard, Southern and Xavier universities.

“I know any way I can contribute and give back to the things that have been around for years, I want to do,” said Kaira Stelly, who will be riding on the Zulu Governor’s float, one of the most prestigious floats because the Zulu King and Queen will be aboard.

Stelly, a native of New Orleans who now lives in Silver Spring, Md., just outside Washington, D.C., told BlackAmericaWeb.com that she tries to get home every year to participate.

She said that it is even more important to help build the economy and black organizations in the wake of Katrina. She said the Zulu’s theme this year, “Keep It Rollin’,” sums up what participating in Mardi Gras means to her and her family.

“I’ve got family riding with me this year, my dad, my aunt,” Stelly said, adding that it is hard work trying to keep up with the planning meetings and other activities that Zulu sponsors because she lives so far away.

It also is a serious investment of money. Whether you are a member of an organization or a civilian who wants to ride on a float, you have to ante up.

“Anybody can ride a float, as long as you pay your reciprocity,” Lee said. “Everything is a budget; everything is about dollars. It averages $1,200-plus to be a member, then you have to buy your throws,” the trinkets thrown from the floats to the crowd in the street.

The more prestigious the float, the more it costs to ride, but the fee to ride runs around $1,500.

“You have no idea. It gets costly. There’s always that one thing more you tell yourself you wish you had. But I’m at the point that whatever I have, I have. There is no turning back. We have to be ready to start assembling at 2 a.m.,” Stelly said the evening before Mardi Gras.

“You’ve got to see it to believe it,” Lee said. “Until you really feel it and breathe it and smell it and feel it, you’ll never know. It helps you escape. For that one day, you forget about your troubles.”
Posted by Monica Roberts at 10:24 PM