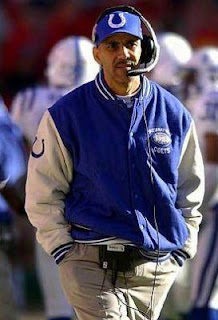 Congratulations to Tony Dungy for officially becoming the first African-American head coach to win the Super Bowl as the Indianapolis Colts beat the Chicago Bears 29-17 in Miami.

He's been saddled with the label of the coach who couldn't win the big one. He took Tampa Bay to the playoffs numerous times, made it to the NFC championship game in 1999 but fell short 11-6 to the St. Louis Rams thanks to a questionable call. After becoming head coach of the Colts in 2002 they had to deal with the agony of having their seasons end at the hands of the New England Patriots in the AFC Championship in 2003, losing to them the next year and the Steelers in the 2005 divisional round of the NFL playoffs. Today's Super Bowl XLI win ended that frustration for him.

Dungy also became the third coach to win a Super Bowl as a player and a coach following Oakland's Tom Flores and Mike Ditka in accomplishing that feat. He was a safety on the Pittsburgh Steelers in 1978 that won Super Bowl XIII, ironically which was played in Miami.

The 'Soul Bowl' was an entertaining game from start to finish, if you're a Colts fan. My roomie Dawn was born in Chicago and is a rabid Bears fan. She was very happy after Devin Hester's 92 yard kickoff return to open the game. I said to her, "Ohio State started the BCS Championship game with an opening kickoff return, too. That championship trophy is sitting in Gainesville, FL right now."

The Vince Lombardi Trophy is headed to Circle City and it couldn't have happened to a nicer guy. Congrats to the Chicago Bears and another class act from the Lone Star State, coach Lovie Smith for a wonderful season.
Posted by Monica Roberts at 10:04 PM

Congrats to the Colts and Tony Dungy. Classy man and talented head coach. Yes, he beat my Bears. But I think the best team won Sunday no question about it. Very proud of both teams and both Head Coaches.