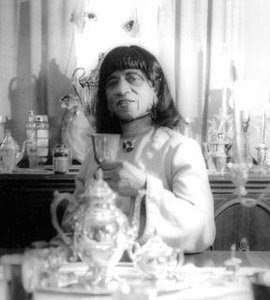 When I first moved to Kentucky I began to hear the stories from Dawn and other Lexingtonians about their legendary transgender resident 'Sweet Evening Breeze'. I stumbled across this article while doing research one night for another column.

James Herndon was born in Scott County, KY and was the youngest of John and Kate Herndon's eight children. According to Leigh Angelique,local entertainer, drag queen, and friend of the late Mr. Herndon, James was born in 1889, one year prior to Leigh's grandmother.

In his many decades living in Lexington, KY he was widely regarded as the city's most colorful character, and there are numerous stories (both true and legendary) about Herndon. In fact, few Lexingtonians really know him as James Herndon. He is more widely known by his nickname, "Sweet Evening Breeze," or "Miss Sweets."

He often wore make-up, occassionally performed or appeared on Main St. on Saturdays in drag, and was apparently quite effeminate. Long before there was RuPaul, Lexington's Sweet Evening Breeze was titallating and gaining respect from locals.

For most of his long life, Sweets worked at Good Samaritan Hospital. Taken to the hospital for an eye injury by his uncle as a child, he was left overnight there. Details are obscure, but apparently the boy was basically left at the hospital. He became friends with Miss Lake Johnson, the hospital superintendent, who gave him a room there. He eventually began delivering the hospital mail and playing his ukulele for patients. Through his late childhood and teen years spent living and working in the hospital, he finally learned the profession of orderly, a career that he followed for 40 years at Good Sams. He was widely regarded as the best orderly in the hospital and usually trained new orderlies.

Eventually moving to Prall Street, a part of a hundred year old African-American neighborhood across from UK behind Alfalfa's and Bourbon St. Cafe, he filled his home with antiques and kept it spotlessly clean by all reports. Considering that Herndon lived in the era of segregation, his job as an orderly gave him a relatively high income for African-American Lexingtonians during the early part of this century.

Stories about Herndon are numerous. Some of the authenticated include:

-Herndon was considered in his day to be an excellent cook. During World War II he would meet troops passing through Lexington at the train station and give them his homemade cakes. His fruitcake... the irony not being lost here... was considered his crowning culinary achievement.

-His most notable drag performance apparently was at the Woodland Auditorium where he was lowered from the ceiling in a basket dressed in "feminine frills" and danced the "Passion Dance of the Bongo Bangoes."

-Decades before Ziggy Stardust and David Bowie gave new emphasis to gender-bending, Miss Sweets would spend his Saturdays visiting with friends and acquaintances on Main Street. Upon seeing RuPaul on TV, one elderly woman in Harrodsburg told my friend Marc that Ru was nothing new. She reminensced fondly of trips with her fiance (later husband)long ago into Lexington to shop on Saturdays. The couple always made a point to stop and visit with "Miss Sweets." As Sweet Evening Breeze, Herndon might appear in a range of dress that might include a suit plus lipstick and eye-liner.

-When the doctors and nurses at Good Sams would play each other in basketball, Sweets was the cheerleader.

-Every year during the Bluegrass Fair, Herndon would hold a large banquet for his family coming in from Scott County. He also regularly sent or would take gifts back to his family and old neighborhood there.

-For many years he was a member of historic Pleasant Green Baptist Church. Upon his death, he apparently left a considerable amount of money to the church.

-There are also conflicting tales over a legal episode in Sweets' life: At some point circa 1960, a teenaged Leigh Angelique, another local African-American drag queen, was arrested for violating Lexington's ordinance against cross-dressing except on Halloween. One story holds that Sweets bailed Leigh out of jail and subsequently defended her in court. When the case was brought before the judge, Sweets supposedly pointed to a woman in the courtroom and told that judge that if it was a crime to wear makeup, then the woman should be charged equally to any man. The judge then threw the case out on the grounds that the ordinance unfairly punished one sex for behavior accepted for the other as well as on particular holidays.

Leigh Angelique herself claims, however, that actually both Sweets and herself were jailed. While in jail they even performed a mini-drag show for the curious guards who even went so far as to tip the "girls" for their act. Either a jailor or other prominent friend of Sweets spoke to the judge on their behalf. Sweets spoke up against jailing men for makeup and not women, and the case was dismissed.

With this judgement, Lexington's ordinance against public drag was apparently overturned.

-On the more risque side, older gay men in town remember that Sweets could be seen on occassion frequenting the bathrooms of the Phoenix Hotel and Union Station for "tearoom trade." His home on Prall Street according to these accounts also served as a meeting place for gay people and a sometimes sexual outlet for a number of otherwise closeted UK students.

-Whether Sweets ever settled down and found a partner is difficult to say. Local legends do not mention such a man, but his obituary does hold this tantalizing sentence: "He is survived by... a host of great-nieces and nephews; close friends, INCLUDING HUGH STERLING (emphasis added), and his church family." Perhaps this Hugh Sterling was Herndon's partner?

Through the Depression, World War II, and desegregation, Herndon cut a path as an openly gay man, drag queen, and possibly even a transgendered person. Legend holds that Herndon was accepted in part because he was a hermaphrodite whose will donated his body to UK for scientific study. Nothing I have yet uncovered, however,
substantiates this donation or supposed hermaphroditism. Sweets' many friends described him as sensitive and kind. They relate that he was often deeply hurt and enraged when people would make fun of him. 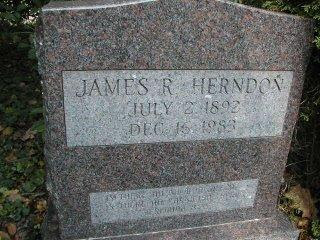 Herndon died on Friday, Dec. 16, 1983, at the Homestead Nursing Center. He was thought to be in his 90s and was survived by many loving friends and family. For his achievement of being himself against the odds, the Royal Sovereign Imperial Court of All Kentucky named its highest honor the James Herndon Award. Last year the Lexington Men's Chorus also named its small singing ensemble Sweet Evening Breeze in his honor as well.

If one does research on Lexington's gay and/or African-American communities, there is very little information on individual lives before the 1950s. There is, however, an entire slim file in the Kentucky Room on none other than the man that several writers have called Lexington's most memorable and colorful character: