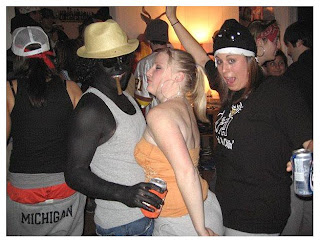 TheCarolinaChannel.com
11:38 a.m. EST January 30, 2007
GREENVILLE, S.C. - A party held by some Clemson University students two weeks ago is causing controversy after pictures taken at the event ended up on the Internet. Some students say it was just for fun. Others say that it was racist.

The party was held the day before the Martin Luther King Jr. holiday. The theme of the party was "Living the Dream," but some Clemson students are calling it a nightmare.

Pictures of the party were posted on facebook.com, showing at least one person in black-face paint, with others dressed in knitted caps and jerseys and some girls with stuffing padding their pants to make their behinds look larger. There's an image of party-goers holding 40-ounce bottles of malt liquor.

Clemson officials said that the images were taken at an off-campus party thrown by some university students.

University administrators said the behavior at the party is unacceptable and they met with hundreds of angry students on Monday night to discuss the situation.

Officials also said that they plan to meet with those who attended the party and eventually bring the two groups together.

One student said, "We have a lot of theme parties where you dress up and have fun. We decided we'd have a "gangsta" party for fun. You know, the gangsta's like the hip hop culture. So we dressed up. We did not know it would offend so many people...and we did. We feel so bad about it. We realize we can't begin to apologize to all the people we offended."

Ranneice McDonald, another Clemson student, said she saw nothing funny about it.

"People painted themselves black. Put fake butts inside their pants to signify the big booty black-girl thing. Fake gold teeth in their mouths caps and jerseys -- depicted us as wearing such things as that are disgusting to me. It's disgusting. It makes me sick to my stomach," McDonald said.

"I was hurt that there were people who think that it's OK," she said.

School officials said that some of the students who threw the party approached them in an effort to make things right once they heard people criticizing the party.

The students involved told WYFF News 4 that they threw the party to show unity, and they apologized for the damage that they have done.

Theme Party Not The Country's Only One

The Web site The Smoking Gun reported that similar parties were held at both the University of Connecticut and Tarleton State University in Texas. To see the reports on the other parties, click on the links: