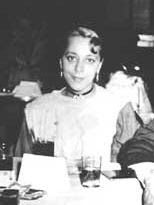 Almost ten years before that fateful December 1, 1955 day that Rosa Parks sat down on a Montgomery, AL bus that was headed home and jump started a movement, Viola Desmond did the same for African-Canadians.

Viola Desmond (1914-1965) was a young Halifax businesswoman and beautician who owned and operated a beauty school there. On November 8th, 1946, she was on her way to Sydney, NS for a meeting when she got caught in a blizzard in New Glasgow, NS and her car broke down.

When a mechanic told her he couldn't fix the problem until the next day she found a place to stay for the night. Desmond decided to pass the time with a movie at the local Roseland Theatre. She asked for a ticket for house seats, but the teller sold her a ticket for the balcony, which was where Black people had to sit in that town.

When she sat in the lower "Whites Only" house seats, the manager ordered her to sit in the balcony, which was designated for Black patrons. When she refused, he called the police and she was arrested. Desmond was dragged from the theater and thrown in jail overnight. Bruised and angry, she sat upright all night and for the next 12 hours on the hard jail bench while wearing her white gloves.

In the morning she was charged by the magistrate with "attempting to defraud the Federal Government" based on her refusal to pay the one cent amusement tax difference between the 3 cents charged to those sitting in the balcony and the 2 cents charged to those sitting downstairs. Even though she had offered to pay the difference in ticket price, she was convicted of failing to pay the tax on the downstairs ticket. After a short trial, Viola was sentenced to a fine of $20 plus court costs and 30 days in prison.

Viola Desmond's arrest galvanized the Afro-Canadian community into action. The new Nova Scotia Association for the Advancement of Coloured People (NSAACP), founded only a year earlier by William and Pearleen Oliver, raised the money to pay her fine and fight her conviction. Carrie Best, the founder of Nova Scotia's first Black owned and operated newspaper publicized her story. Best was familiar with Desmond's situation. She'd been thrown out of the Roseland Theater herself four years earlier for refusing to sit in the balcony and unsuccessfully filed a damage suit against the theater's management.

I just listened to a docu-drama on CBC radio about Viola's case, and my understanding is that, unfortunately, Viola lost her re-appeal.

Thanks for posting this, as too many Canadians think that we have never had any race discrimination.

Harold,
You're welcome. I found her story interesting as well.