The Man and the Story of The Black National Anthem 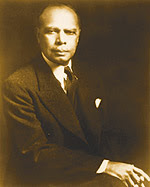 It was written by James Weldon Johnson with music composed by his brother J. Rosamond Johnson. The song was written for a celebration of Abraham Lincoln's birthday at the school.

He and his brother had forgotten it, but the students who heard it that day didn't. They taught it to their children and other children throughout the South. The song became so popular that the NAACP offically adopted it as the Negro National Anthem in 1920.


Lift every voice and sing
Till earth and heaven ring,
Ring with the harmonies of Liberty;
Let our rejoicing rise
High as the listening skies,
Let it resound loud as the rolling sea.
Sing a song full of the faith that the dark past has taught us,
Sing a song full of the hope that the present has brought us,
Facing the rising sun of our new day begun
Let us march on till victory is won.

Stony the road we trod,
Bitter the chastening rod,
Felt in the days when hope unborn had died;
Yet with a steady beat,
Have not our weary feet
Come to the place for which our fathers sighed?
We have come over a way that with tears have been watered,
We have come, treading our path through the blood of the slaughtered,
Out from the gloomy past,
Till now we stand at last
Where the white gleam of our bright star is cast.

God of our weary years,
God of our silent tears,
Thou who has brought us thus far on the way;
Thou who has by Thy might
Led us into the light,
Keep us forever in the path, we pray.
Lest our feet stray from the places, Our God, where we met Thee;
Lest, our hearts drunk with the wine of the world, we forget Thee;
Shadowed beneath Thy hand,
May we forever stand.
True to our GOD,
True to our native land

He was born in Jacksonville, FL in 1871 during the heady optimism of the Reconstruction period. His mother was a schoolteacher at the Stanton School, his father a head waiter at one of Jacksonville's numerous resort hotels and young James and his brother grew up with middle class backgrounds. After completing the eighth grade he was sent to Atlanta, GA to attend the college prep school and university divisions for Atlanta University since there were no high school at the time in Fhis hometown for African-Americans. After graduating from Atlanta University in 1894 he returned home and became the first African-American attorney in Florida since Reconstruction.

He soon tired of practicing law and became principal of his alma mater the Stanton School. Thanks to the influence of Booker T. Washington in 1906 he was appointed by President Theodore Roosevelt as consul to Puerto Cabello, Venezuela. In 1909 he moved to a more significant consular posting in Corinto, Nicaragua but left the consular service in 1913 after the election of Woodrow Wilson to the presidency.

He joined the NAACP in 1917 and as a field secretary established local chapters througout the South and increased overall membership from 10,000 to 44,000 by the end of 1918. In 1920 he became the first African-Ameerican secretary (CEO) of the multi-racial NAACP and held that post until 1931.

He was also continuing his literary efforts and was more renowned as an writer than a civil-rights warrior. During this time period he'd moved to New York, gotten married and played an active role in the Harlem Renaissance. He served as a mentor to writers Langston Hughes and Claude McKay and urged others to draw upon everyday African-American life as inspiration for their creative works.

He was deeply commmited to exposing the brutality and injustice heaped upon African-Americans and eliminating it. He pushed hard to get the Dyer Anti-Lynching bill passed that would have made lynching a federal crime. He not only worked successfully to get the NAACP on a firm financial footing but was responsible for the NAACP becoming a clearinghouse for civil-rights court cases. He worked with noted attorneys of that time in litigating a series of cases that attacked the legal pillars propping up segregation and worked closely with W.E.B. DuBois and Walter White (the man who succeeded him) to coordinate strategy.

He became a professor at Fisk University in 1931 and spent the remainder of his life teaching creative writing, American and African-American literature and writing. He was killed in an automobile accident near Wiscasset, Maine in 1938.

Johnson acknowledged in 1926 that he didn't originally set out to write a unifying national anthem when he penned the words to 'Lift Ev'ry Voice' and admitted that he'd let the song pass from his mind. But as songs sometimes do they take on a life and meaning of their own.

Thank you James Weldon Johnson, for all that you've done to uplift our people.
Posted by Monica Roberts at 7:53 AM

Monica, I enjoyed reading this post you made a few months ago. I found your post when I was browsing internet sites for my 5-part series on Lift Ev'ry Voice and Sing which started on 2/25/07 and finally finished today, 4/7/07.

I invite you to check my blog. Here's the link to the first of the 5 posts.
http://truffles-turtles-tunes.blogspot.com/2007_02_01_archive.html

The material there was collected over several years - but now that I've got a blog I decided to polish it up and publish it.

If I were gold für wow a boy again,world of warcraft gold I would practice perseverance wow gold cheap more often,maple meso and never give up a thing because it was or inconvenient. If we want light,Maple Story Account we must conquer darkness. Perseverance can sometimes equal genius in its results.wow gold kaufen “There are only two creatures,”cheap maplestory mesos syas a proverb, “who can surmount the pyramids—the eagle and the snail.” If I were a boy again,wow geld I would school myself into a habit of attention;maple mesos I would let nothing come between me and the subject in hand.maple story power leveling I would remember that a good skater never tries to skate in two directions at once.billig wow gold The habit of attention becomes part of our life, if we begain early enough. I often hear grown up people say maple story items“ I could not fix my attention on the sermon or book, although I wished to do so” , wow powerlevelingand the reason is, the habit was not formed in youth. If I were to live my life over again,wow leveling I would pay more attention to the cultivation of the memory. I would strengthen that faculty by every possible means,wow power leveling and on every possible occasion.maplestory powerleveling It takes a little hard work at first to remember things accurately;cheap archlord gold but memory soon helps itself, and gives very little trouble. It only needs early cultivation to become a power.