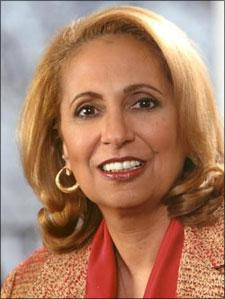 As a child who grew up around radio stations, Cathy Hughes is someone I have much love and respect for. If it weren't for her your local Black radio stations probably wouldn't exist or much less have the intense community oriented focus that the 71 Radio One stations in 22 markets nationwide pride themselves on.

Born in Omaha, NE in 1947, the founder and chairperson of Radio One, Inc is considered one of the most powerful women in Black America. Essence Magazine named her one of '100 Persons Who Changed the World'. Radio Ink lists Hughes as one of the “20 Most Influential Women in Radio”. She and her son Alfred C. Liggins III, Radio One's President & CEO run the largest African-American owned and operated broadcast company in the nation. She's also made a lot of history in the process.

Radio One is the first African-American company in radio history to dominate several major markets simultaneously. Hughes also has the distinction of being the first woman in radio history to own a number one ranked major market station. In 1995, Radio One made broadcasting history again when the largest transaction between two Black owned companies occured when it it purchased Washington, D.C. WKYS-FM for $40 million.

In May 1999 another milestone historical moment occurred. When Cathy Hughes and her son took their company public, it made her the first African-American woman with a company on the stock exchange. In 2000, Black Enterprise named Radio One, “Company of the Year”, Fortune rated it one of the “100 Best Companies to Work For,” and Radio One was inducted into the Maryland Business Hall of Fame.

Her goal of building a broadcast empire with a solid foundation in the African-American community has come to fruition. Radio One’s value is currently in excess of $2 billion, and with that increace in revenue opportunities for minorities and women in the white-male dominated radio buisness have increased as well.

Hughes currently has more than 1,500 Black broadcasters on staff at Radio One, Inc. the seventh largest radio corporation in the United States. Radio One stations reach over 18 million Black listeners daily in 15 states and just celebrated its 25th anniversary last August.

Her dedication to minority communities, entrepreneurial spirit, pride in our heritage and mentoring of women are proudly manifested in her work and life. It has earned her many awards, including an honorary doctorate from Howard University.

She moved to Washington, D.C. in 1971 and became a lecturer in the newly-established School of Communications at Howard University. She entered radio in 1973 as general sales manager at Howard University’s WHUR-Radio, increasing station revenue from $250,000 to $3 million in her first year.

In 1975, Hughes became the first female vice president and general manager of a station in the nation’s capital and created the "Quiet Storm" format. It is the most listened to nighttime radio format and is currently heard in over 50 markets nationally. Purchasing her first station in 1980, Washington D.C.'s WOL-AM she pioneered yet another innovative format -- “24 hour Talk from a Black Perspective.” With the theme, "Information is Power," WOL became the most listened to talk radio station in the nation’s capital.

Radio One’s newest venture is TV One, Inc., launched in partnership with Comcast on January 19, 2004. TV One caters to the adult lifestyles of African Americans offering quality programming such as “B. Smith with Style,” and an array of original programming. Hughes is on the board of TV One, is the Executive Producer of “The Gospel of Music with Jeff Majors,” and also hosts TV One’s interview show, “TV One on One.”

Radio One also owns REACH Media, Black America web.com, and The Power, a 24/7 satellite radio channel on XM radio 169 devoted to talk about social, political and economic issues from an African American perspective.

She went though some trials to get to that point. She was all set to go to college in 1965 until the discovery that she was pregnant put an end to those plans. She was a divorced single mother when she made 32 presentations to banks trying to get the loan she needed to purchase WOL-AM. The 33rd presentation to a new Latina loan officer at Chemical Bank garnered her $600,000 of the $1 million she needed with the remainder coming from venture capitalists.

That was only the beginning. When Hughes took possession of the station she discovered that the previous owner fired the entire staff and they responded by trashing the station. She had to bring LP's from her personal collection to play on the air. In addition during those lean years she had to sell a family heirloom white gold watch made by slaves that belonged to her great-grandmother for $50,000. When her house and car were repossessed she slept in a sleeping bag in the station for 18 months. She and her son persevered and six years later WOL turned its first profit.

So the next time you're listening to the Quiet Storm on your local radio station or are checking out TV One on cable, say a word of thanks to Cathy Hughes and her son for not only making history, but keeping Black radio alive in the 21st century.

The Washington Post had it right. In D.C. Hughes was called 'The Voice of the Black Community' from her days as an outspoken talk show host at WOL-AM with deep roots in it. She's now expanded that reach to cover the entire nation.
Posted by Monica Roberts at 9:00 PM