If Anna Nicole Smith Were Black, Would She Be Getting Such A Glorified Post Mortem? No 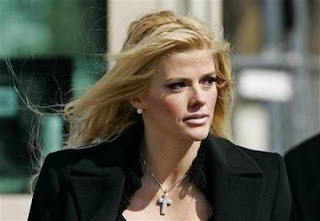 Maybe it's out of respect for the dead that Rush Limbaugh hasn't called ex-stripper and Playboy centerfold Anna Nicole Smith a "ho," the insult he leveled at the black stripper who accused three Duke University lacrosse players of raping her in a bathroom.

But I suspect that when people like Limbaugh see white women who behave like Smith, they see her through the prism of quirkiness and outrageousness. With black women, they're quicker to turn the morality lens on us.

And when they look at us with that lens, they tend to freeze us in it.

First of all, let me say that it is always a sad thing to hear of anyone dying before their time, whether that person is a 19-year-old black guy who gets gunned down by gang bullets or a 39-year-old blonde bombshell like Smith, whose excesses finally caught up with her. Sadder still is that Smith leaves behind a five-month-old daughter, Dannielynn, who will never know her mother.

But when you strip away the spin and apply the morality standards to her life that black women, and especially poor black women, are lambasted for not living up to, you find someone who fell far short of those standards.

Yet in spite of that, she's being iconized.

Let's see. Smith began her climb to fame as a stripper. She posed naked in Playboy, and achieved her greatest fame as a Guess? Jeans model. She had no great artistic talent to dwarf those superficial beginnings, so she built her life on trying to find bizarre ways to stay in the spotlight.

By the end of her life, she had become a drug abuser and had given birth to a daughter out-of-wedlock. Three men are claiming to have fathered her daughter -- one of which includes a married man, Prince Frederick von Anhalt -- who claims they had an affair since the 1990s.

While no one will know, at least for a while, who Dannielynn's real daddy is, what is clear is that Smith was a tad promiscuous. She did triple the things that got Janet Jackson vilified for exposing a nipple ring at the 2004 Super Bowl, but even her death won't make her go away.

The headlines and newscasts have been dominated by her. Journalists are combing her old stomping ground in Mexia, Texas to uncover clues about her childhood. She's being dubbed as a "tragic beauty," and, laughably, being compared to Marilyn Monroe -- even though her closest brush with movie fame came in a "Naked Gun" spoof.

Yet when I think about how Smith lived her life, and all the empathetic airings of the circumstances surrounding her death, I have to wonder: If she were black, would there have been a rush to euphemize her? Would writers be struggling to find meaning in her life, a life that was basically driven by her need to be in spotlight?

The answer I keep coming up with is no.

Even a black woman as talented as Jackson wasn't able to make outrageousness work for her. Her wardrobe malfunction, for example, sent America into a tizzy for months. No one saw it as gutsy, or even accepted it as a mistake as much as they saw it as immoral, as all that was wrong with America.

She couldn't apologize enough for it. And people wouldn't let it go.

Some pundits even blamed her and "Nipplegate" for galvanizing morals voters and causing John Kerry to lose the 2004 presidential election.
Anytime she visited a new place, few media smart-alecks could resist admonishing her to keep her clothes on.

I wonder what those so-called morals voters are saying now, as the tawdry details of Smith's daughter's paternity continue to eat up much more air time than the 2004 Super Bowl did.

Now, none of this is to say that black women ought to be out there fighting to get famous for being loose or promiscuous. But as I constantly am bombarded with the details of Smith's life, I can't help but to think about how race and wealth is lived in this country. I think about how Smith receives adulation and empathy in spite of the way that she lived her life, and black women like Jackson, as well as the Duke stripper, receive only contempt and are held up as examples of black immorality if they take off their clothes in public or have babies out of wedlock. And while I'm all for black women holding themselves to high behavioral standards, I still don't like it when we're held to a double one.

One that makes the lower standards fine as long as they come in creamy blond packaging.
Posted by Monica Roberts at 11:40 AM