It's Black History Month In Canada, Too!

The official recognition of Black History Month in Canada is the result of a December 1995 motion introduced by the Honorable Jean Augustine, Member of Parliament for Etobicoke-Lakeshore and the first Black Canadian woman elected to the Canadian Parliament.

That motion carried unanimously by the House of Commons and the Canadian Parliament resulted in the first official recognition of Black History Month in Canada taking place in February 1996.

Despite a presence in Canada that dates back farther than Samuel de Champlain's first voyage down the St. Lawrence River, as one of my Canadian readers commented to me in another post, people of African descent are largely absent from Canadian history books. There is little mention of the fact that slavery once existed in the territory that is now Canada, or that many of the Loyalists who came here after the American Revolution and settled in the Maritimes were Black.

Few Canadians are aware of the many sacrifices made in wartime by Black Canadian soldiers as far back as the War of 1812. African-Americans are unaware that we do have spiritual, cultural and historical connections with our Canadian cousins. African-Canadians were at the forefront of the anti-slavery movement in the 1800s and were equally involved in human rights struggles in the 1960s and 1970s. 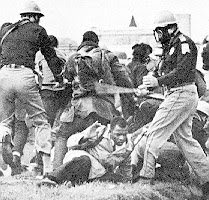 African-Canadians took critical looks at their own society as a result of watching the numerous violent incidents, church bombings and overly violent reactions to non-violent protest directed at the African-American community. Canadian segregation was addressed following the 1946 Viola Desmond incident but the work to change legislation, societal behaviors and practices on both sides of our shared border is ongoing.

Dr. Woodson would probably be pleased to know that the event he started as Negro History Week in 1926 is beginning to take on an international dimension. The people of African descent who live in the United States would benefit from not only remembering and learning about our struggles but expanding our minds to learn about the history and culture of our Canadian friends and African communities throughout the Diaspora.
Posted by Monica Roberts at 5:14 PM