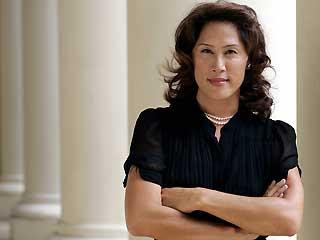 When  Kim Coco Iwamoto was growing up in Hawaii,  her parents stressed that education was the key to achieving her goals.

After graduating from high school she subsequently earned her undergraduate degree from San Francisco State University and a law degree from the University of New Mexico.

On November 6, 2006 she was elected to Hawaii's State Board of Education. In the process she became the first out transgender person to win a statewide office and has the distinction of being the highest ranking transgender elected official in the U.S.

"I didn't run to get this attention as an individual. I ran to be an advocate for the students," the 38-year-old civil rights lawyer said.

Iwamoto credits the higher values Hawaiian culture places on responsibility to family and community over personal identity for giving her the confidence to seek out success.

"For me it's about resilience and having a strong core of self-esteem, which I was very fortunate to have the support and love my parents, my family," she said. "Really, in the face of adversity you have to tap into that place where you feel valued as a member of family and a larger community."

Iwamoto pointed out that Hawaii voters have ushered in a host of electoral firsts in addition to her successful run for statewide office. They include the ratification of the federal Equal Rights Amendment in 1972 and the election of Hiram Fong, the first Asian-American U.S senator shortly after Hawaii gained statehood in 1959.

"This election speaks less of me and much more, I think, of the place and the people of Hawaii — the fact that Hawaii's always been a place of fair-minded, critical thinking voters who vote on the issues and who see people for the substance of their character," Iwamoto said.

She didn't make her gender status a part of her campaign, but she has long been a vocal advocate for the transgender community. She also listed her attendance at an Honolulu all-boy's school, St. Louis High School, and her board membership of Kulia Na Mamo, a local transgender organization, in her campaign materials.

When asked when she knew she was different, Iwamoto replied, "I've only been me."

Iwamoto got involved in local education after becoming a foster parent three years ago. By advocating for her children, two of which are now in college, and other youth, Iwamoto said she found herself testifying before the board on a variety of issues. Board Chairman Randall Yee said he was "very impressed" by Iwamoto's testimony and called her background "excellent."

"She has a legal background. She has a business background — business family. And I just felt that in terms of bringing different individuals with different perspectives on the board, I felt that she would bring a good perspective," he said.

"Whatever the situation, I think if kids grow up with a core sense of self-esteem and feeling like they're a valuable part of their family, of their classroom, of their school, their community and if we teach to their potentials," she said. "I think that's the key to having them be in a position where they can give back to their families and communities."