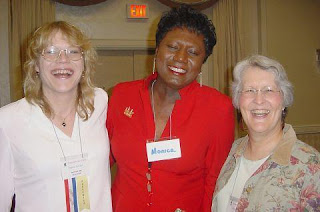 photo-IFGE's Denise LeClair, me and Phyllis Frye at the 2006 IFGE Convention in Philadelphia.

What can I say about the Phyllabuster?

She's a dear friend, a fellow Texan, my activist mentor and one of the first people along with Sarah DePalma that welcomed me into the Houston transgender community with open arms. Phyllis is a major reason why Houston not only has a large transgender community, but why so many of us from there have leadership roles at the local, state and national levels in it.

She was born the second of three children in San Antonio and was an Eagle Boy Scout, her high school’s ROTC Commander, a multi-scholarship university student at Texas A&M, a member of the Aggie Corps of Cadets, a career military officer, a licensed civil engineer, a husband and a father.

She began to address the transgender issues that she'd tried to bury since age six in the early 1970's. She was not only bounced from the military but ended up getting divorced from her first wife. She remarried, but had a tough time finding a job in the macho world of Houston's engineering firms and decided to go to law school.

Phyllis Frye spearheaded the successful effort to overturn the Houston anti-cross-dressing law in 1980. (the story of the events that led up to it is on the blog). In 1979, 1981, 1983 and 1985 Phyllis was elected as an out transgender delegate to the Texas Democratic Party Convention. She was instrumental in persuading the Party to adopt a gay rights plank in 1983.

She also served, as an out transgender woman, as an elected director and later a vice president of the Houston League of Women Voters. In 1998 she was also appointed by the State Bar President to the Committee for Legal Matters Concerning the Indigent in Criminal Matters. In 1993 she was honored with the highest award giving by the transgender community to one of its own -- the Virginia Prince Lifetime Contribution Award from the International Foundation for Gender Education.

She's a founding partner in the Houston law firm Nechman, Simoneaux and Frye. She has been not only at the forefront of fighting for GLBT civil rights but has been a supportive and outspoken ally about pushing the GLBT community to include people of color in leadership roles. She's still married to her second wife Trish and was recently honored in 2006 by being voted as grand marshal for the Houston Pride parade.

She also plays a mean guitar ;)

I firsr heard about her when I was a freshman at UH and she was a law school student at the time. Ironically our paths didn't cross until 1997. My old gender clinic in Galveston has a twice yearly meet-and-greet event in June and December in which past and present (and sometimes future) clients get together to talk about issues and how our lives are going. That's where I met her, Sarah DePalma (Mommy Sarah I call her) and the late Dee McKellar. At the December 1998 one she and Sarah were there.
Right after she overheard me agreeing to do an interview on 'After Hours', a Houston GLBT themed radio show on KPFT-FM that I later co-hosted with Sarah and Jimmy Carper for two years, Phyllis challenged me to show up in Austin for the TGAIN lobby day that was in the final planning stages at that time.

I did and had the honor of walking into several legislative offices with her at my side. She's one of the people I call or e-mail when I need a historical perspective on things or I get homesick. I've even clashed with her strong-willed behind on occasion (hey, we're Texas women and we ain't wimps. She's an Aggie, I'm a Cougar. What can I say?)

I admire her creative legal mind and have much love and respect for her. She's taught consumer law at TSU's Thurgood Marshall Law School, written numerous law review articles and been a featured speaker at a wide array of events from gender, civil rights and legal conferences to the 1993 March on Washington.

She's gone through some drama like we all have on one level or another. But one of the lessons that she taught me and everyone one else is when you get punched by life, get off the canvas and don't let anyone jack with your civil rights without a fight.

Other lessons I learned from her is that transition shouldn't stop us from full participation in society. We transpeople need to get out there and get involved with mainstream organizations. We also need to have fun doing the things that you like to do. She was a shining example to me when I needed one about being out and proud of being transgender.

She's still got it going on.


TransGriot Notes:
For more info on Phyllis, click on her name to see her website http://www.transgenderlegal.com/
Posted by Monica Roberts at 12:49 AM