Why Y'all Hatin' On Beyonce? 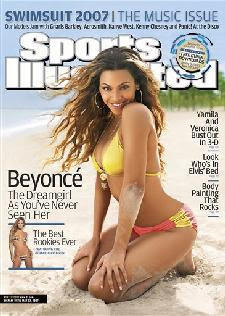 I used to joke back when Destiny's Child was the hottest group going that they were the Supremes 2K version. Not long after that Beyonce released her solo album followed by Kelly Rowland's and Michelle Williams' solo releases.

I've noticed over the last year or so the increasing negativity from the Net and other quarters being directed at my Houston homegirl. I've heard people take perverse glee in the fact that Jennifer Hudson emerged as the breakout star of Dreamgirls and I'm a big Jennifer Hudson fan. I refuse to watch American Idol because she was screwed that year.

I'll be honest. If the technology were available for me to look like ANY woman past, present or future on the planet, she'd be in my top five. (hmm, there's an idea for a post. I'll get back to y'all on that later)

I had the pleasure of meeting Beyonce and her parents on an LAX flight I worked several years ago. I've had other peeps who spend extensive time around her report that she's a sweet kid. (I observed the same thing myself).

Frankly, I think a lot of the industrial sized Hateraid that's directed at Beyonce Giselle Knowles stems from jealousy. She's living what seems like a fairy-tale life. She's breathtakingly beautiful but down to earth. She's won Grammys. She sings the national anthem at the 2004 Super Bowl played in our hometown. She has a wealthy boyfriend in Jay-Z. She just became the first non-athlete, non-model and the second African-American woman to do the coveted Sports Illustrated swimsuit issue cover solo. If I'd come up with her story as the basis for a fiction novel people would roll their eyes and claim it's unrealistic.

It's real folks. Check out the videos and the Billboard Top 100 lists.

You have to admire someone whose father believed in his daughter's dream so much he quit his job at IBM to manage her career. Her mom Tina's shop is where during the 90's the power sisters in H-town got their hair done. The Knowleses were successful peeps and entrepreneurs before Beyonce blew up in the music biz. They have given money to their home church in Houston. The House of Dereon fashion design house they just started will drive that point home once again.

It's time for some of y'all to stop hatin' on the Knowles family, start appreciating and start taking notes.
Posted by Monica Roberts at 1:54 PM

And even more, she is a songwriter too. Just beautiful and talented and nice. So proud of her!!!