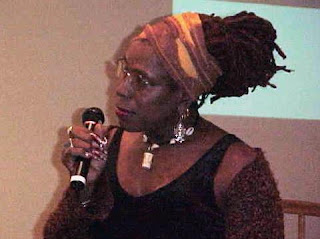 
As Lorrainne puts it, she said, "I did not come out to this community. I stepped on the scene as Lorrainne Sade. No way I ever considered myself a man!"

She grew up in the Cabrini-Green housing projects of Chicago as the eldest of seven children. She said that since early childhood, she "self-identified as a girl. But I had to search [for information]. I thought I had a mental illness. I was always very feminine acting. I grew up with a father missing from the family. My mother was a very strong person. I learned from her."

She left home at 17 and started working every kind of job to make ends meet. Lorrainne began her transition by doing research at the library and connecting with other people like herself.

She has also noted like myself and Dawn the cultural differences betwen white and black transpersons and how it affects transition.

"White transgender people have a risk involved," she said, while African-American people like herself, often battling poverty and discrimination, have less at stake. "That's why we start out early dealing with gender at 13 or 14.

"Look what happens [to white transgenders]: They suppress everything, go in the Army, do all the stuff society says. At a certain age, they're married, kids, picket fence and the volcano erupts."

Baskerville eventually decided to resume her education and in 1994 earned a bachelor's degree in social work from Northeastern Illinois University.

In the 1970s, she became familiar with sex workers' conditions and sometimes was forced to confront a city ordinance of the times that prohibited her appearing in public while wearing female clothing. When AIDS struck a member of her family in the mid-1980s, Baskerville took its health threat seriously. She began to work as a volunteer as a volunteer at organizations such as the Howard Brown Health Center
and Horizons Community Services.

In the 1980's Baskerville became a social worker and founded TransGenesis in 1995, a social service agency for transgenders in Uptown. One of her major goals was to reach out to transgender youths, who often drop out of school because of verbal and emotional abuse and end up on the streets.

She also had a goal of starting a health clinic for transgenders and a fund to award grant money for surgery. She also shares my concerns about young transwomen who undergo dangerous silicone injections from "unqualified, incompetent providers underground," at 'pumping parties' in an attempt to feminize their bodies. She's seen the consequences that r4esult from the multiple use of unsterilized syringes that include everything from gangrene to HIV infections.

In her community activism since 1986, Baskerville has served on the board of Test Positive Aware Network (TPAN), in the Chicago HIV Prevention Planning Group (HPPG), and in the Chicago Police Department's 23rd District Gay and Lesbian Advisory Group.

In 1997, Baskerville received the Greater Chicago Committee's first Georgia Black Award for service to the transgender community. She chaired the Youth Events Committee for the Chicago Black Pride 2000 conference. She was selected by the AIDS Foundation of Chicago and the 13th International AIDS Conference to lead a panel on transgender issues at the conference that was held in Durban, South Africa in July 2004. She is also an advocate for transgendered victims of hate crimes and
violence and was inducted into the Chicago Gay and Lesbian Hall of Fame in 2000.


TransGriot Notes:
Lorrainne is married and living in Thailand now, but I do have hopes of finally meeting her in person one day. We trade e-mails from time to time.
Posted by Monica Roberts at 12:12 AM

Thailand!! She is from Chicago and I would love to meet her too. We should all be grateful for her community service. She is a feather in the GLBT and especially T cap.

I love you Lorrainne for you relentless commitment to our community. We could definitely use a few more sistahs like you. After all, it is our responsibility to safeguard ourselves in a society which promotes bigotry, ignorance, and phobias.

It is up to us to reach back and pull our sistahs forward after we have attained some semblance of achievement, stature, and respect.

This is the only way that society is ever going to recognize us with the proper acknowledgement. This country has already proven that it will rally its forces to resist our progress and push us towards the margins of society.

It will take people like you, Monica, and Dawn, to provide the light and guide our way.

Traci,
Great to hear from you. Hope you can make it to TSTBC this year.