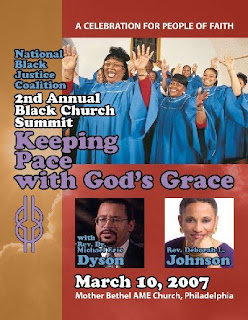 Saturday, March 10 promises to be a hot time at the historic Mother Bethel AME Church in Philadelphia, PA when the National Black Justice Coalition sponsors their second annual Black Church Summit. They will pick up where they left off last year in terms of their discussion on homophobia in the Black Church.

Over three hundred people from across the nation will gather to debate the issue of homosexuality and its role within the Black Church as well as provide solutions on how to create a welcoming and gay-affirming church.

Unlike last year's inaugural event in Atlanta, this year there will be GLBT and anti-GLBT ministers in the same room. Anti-gay ministers such as Bishop Eddie Long and others were invited last year but declined to participate.

One of the reasons this event was created is because of concerns about HIV, anti-gay violence and emotional depression within the Black gay community. The Black Church is either ill equipped or refuses to adequately address these issues. Too many times their response to these problems is to ignore it or hurl vitriolic rhetoric from the pulpit that is not only divisive but exacerbates the problem.

This year’s event will once again attract nationally prominent clergy, civil rights leaders, and many opposed to and also affirming of homosexuality. Our goal is to assist the Black Church on how to embrace their lesbian, gay, bisexual, transgender friends, neighbors, family, and members of their congregations.

The continued silence of the Black gay community on issues dealing with homophobia has left the entire African-American community vulnerable to the divisive tactics of those who do not have the community’s best interests at heart.

The stated goal of the summit is to assist the Black Church in formulating strategies on how to embrace their lesbian, gay, bisexual, transgender friends, neighbors, family, and members of their congregations.

Another goal that the NBJC hopes to accomplish at this event is to expand the ranks of the Black Church Social Justice Community Action Network. It is a national coalition of gay-affirming Black churches and clergy who are actively working to end homophobia and discrimination in the Black church.

They will also address concerns that the continued silence of the Black gay community on issues dealing with homophobia has left the entire community vulnerable to the divisive tactics of those who do not have our community’s best interests at heart.

The sponsor of this event, the National Black Justice Coalition is a nationwide Black gay civil rights organization headquartered in Washington, DC. Its mission is to end racism and homophobia within the Black communities across America.

For those of you who wish to attend, registration is $75 and can be processed online at www.nbjc.org. The address for Mother Bethel AME Church is 419 S. 6th Street in Philadelphia and the summit is scheduled to take place from 9am - 5pm.

Hope this one gets C-SPAN coverage like Tavis' State of the Black Union.
Posted by Monica Roberts at 4:57 PM