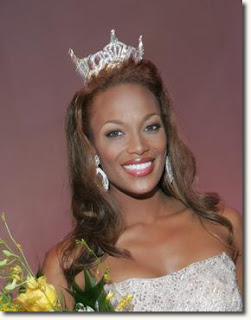 Congratulations to Shilah Phillips who made a little Black history of her own on July 8, 2006. She became the first African-American to win the Miss Texas pageant.

As of yet there hasn't been an African-American who has won the Miss Texas USA pageant, but I have to add an asterisk to that statement.

In 1995 Deer Park resident Chelsi Smith won Miss Texas USA. When she was asked by a reporter how it felt to become the first African-American to win it, she replied that she wasn't Black, she was white. She clarified her statement by saying she was biracial but she'd already angered many Black Texans in the process.

It was like rubbing salt in the wound when she captured the Miss USA and Miss Universe titles later that year. I was even more pissed because one of my homegirls, Crystal Dillard competed in the 1984 Miss Texas USA pageant. Crystal almost made history that night but finished as the 4th runner up.

Okay, I'm done venting now. Back to the story.

I'm happy to see a sistah finally break through in the Miss Texas pageant. Pageants are such a big deal in the Lone Star State this one and Miss Texas USA are televised statewide in prime time. The Texas state pageants are traditionally more competitive and tougher to win than the actual Miss USA and Miss America ones with up to 100 contestants.

Texas girls that win the local ones consistently place in the semifinals of both pageant systems. Three Texans have gone on to win Miss America. Eight Texans have won Miss USA with the aforementioned Chelsi Smith becoming Miss Universe. Halle Berry had the misfortune of competing during the unprecedented run from 1985-1989 in which Texans won Miss USA five straight years, otherwise she would have become the first African-American Miss USA in 1986.

Shilah, congratulations and continued success in all your future endeavors.
Posted by Monica Roberts at 1:49 PM

Ms. Roberts, you should probably do some research before you misquote people. Chelsi never said she was "white"...that's ridiculous. If you'd done your homework and simply typed her name in on Google or some other search engine...you'd see her real response...there are several links to choose from. Shilah's accomplishments are wonderful and as a Black woman I couldn't be more happy for her...but please don't diminish other peoples accomplishments by misquoting them in a degrading fashion. I wish you all the best...

Gee..another comment from somebody that didn't leave a profile....


Janna, she did say it. She went back and cleaned up any subsequent comments but Chelsi had already ticked off African-American Texans with the earler comment and I stand by what I said.

Explain to me in your infinite wisdom how that is denigrating Chelsi's accomplishments?