Hardaway Hates Gays-So Do Some Other Black Peeps 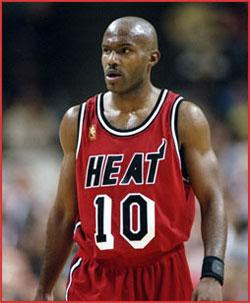 Tim Hardaway's anti-gay comments made me recall a conversation I had with my father when I was a teen. He stated that he had more respect for the Klan than he did for some of the Black community's so-called friends.

When I asked him to clarify that, he pointed out that a Klansman's hatred for Black people is well known and out in the open. With the people that profess to be our friends, they can eat dinner with you and still hate you with the intensity of a Klansman. His thought was that he'd rather know who his enemy was upfront so the appropriate response to deal with him could be formulated.

That conversation resurfaced in my mind as I listened to the replay of Tim Hardaway's radio interview. It turned ugly when the interviewer asked questions about retired NBA center John Amaechi's announcement last week that he is gay.

Incredibly, he went there and indicated that he'd ask for the gay player to be removed from the team.

"Something has to give," Hardaway said. "If you have 12 other ballplayers in your locker room that's upset and can't concentrate and always worried about him in the locker room or on the court or whatever, it's going to be hard for your teammates to win and accept him as a teammate."

John Amaechi, who just released his autobiography Man in the Middle, yesterday said that he hoped his coming out would be a catalyst for intelligent discourse.

Unfortunately, it seems that the words 'intelligent discourse' don't enter some peeps minds when it comes to GLBT issues.

When Amaechi was asked by the Miami Herald about Hardaway's comments, "I'm actually tempted to laugh." he said. "Finally, someone who is honest. It is ridiculous, absurd, petty, bigoted and shows a lack of empathy that is gargantuan and unfathomable. But it is honest. And it illustrates the problem better than any of the fuzzy language other people have used so far."

To his credit, Hardaway later apologized for the remarks during a telephone interview with Miami's WSVN-TV. "Yes, I regret it. I'm sorry. I shouldn't have said I hate gay people or anything like that," he said. "That was my mistake."

Hardaway has reportedly been removed from any further league-related appearances by NBA commissioner David Stern. "It is inappropriate for him to be representing us given the disparity between his views and ours," Stern said in a statement to the South Florida Sun-Sentinel.

If anyone questions the fact that homophobia in the African-American community needs to be confronted, then this should leave no doubts not only as to the extent of the problem but the work we need to do in our community to eradicate it.

There are other Tim Hardaway's out there in our community. Unfortunately some of them stand in pulpits and utter the same rhetoric as he just unleashed except they try to hide their homophobia behind scriptures.

Thanks Tim for letting us know that you're on the same team as the Eddie Long's and Gregory "I'd ride with the KKK" Daniels' of the world.
Posted by Monica Roberts at 11:52 AM