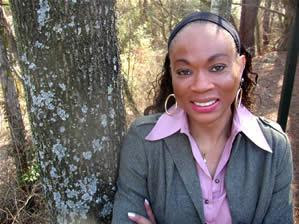 By Ryan Lee
Friday, February 09, 2007
From the Southern Voice

MOMENTS BEFORE TRACEE MCDANIEL prepared to approach the podium outside The King Center on what would have been the revered civil rights leader’s 78th birthday, she began to second-guess the speech she was about to give.

She wondered if the hundreds of people who gathered in the Sweet Auburn district to commemorate the legacy of Dr. Martin Luther King Jr. last month were ready to hear a new message about tolerance, about expanding King’s dreams of equality. For a minute, she questioned if she was ready to be the one who delivered it, or if it might be better for her to at least tone down her words.

“I finally just decided, it’s too late to be changing the speech now,” says McDaniel, who is the first transgender individual to speak at the rally that concludes Atlanta’s annual MLK march. “I thought the message needs to be expressed, and I was just so happy and excited that I was the one who was asked to do so.”

McDaniel received a call from organizers of the MLK march about 10 days before the event inviting her to speak, and ironically was in the middle of studying about MLK and Coretta Scott King for a public speaking and communications course at Georgia Perimeter College.

“I had been doing research and I read about their inclusiveness of the TLGBQ community as a whole, to make sure everyone is represented when it comes to equal rights,” McDaniel says, adding that she was somewhat nervous addressing the mostly black crowd.

“I would say it’s more challenging to build bridges with the African-American community basically because of what we’ve been taught and conditioned to believe over the years,” McDaniel says. “I just relied on the fact that Martin Luther King and Coretta Scott King included openly gay members in the civil rights movement.

“It was one of the most important speeches of my life,” she adds.

That legacy of inclusion is part of what motivates organizers of Atlanta’s MLK march to permit all of its partner organizations — including In The Life Atlanta, a black gay group — to select a speaker to participate in the post-march rally, said Rev. James Orange, who organizes the march on behalf of the Southern Christian Leadership Conference.

“We always have gays and lesbians participating in our rally because it’s their right to be there, too,” Orange says. “We’ve always tried to allow each of [the partner organizations] exposure.”

ABOUT FIVE YEARS AGO, MCDANIEL would’ve had a difficult time imagining herself talking with anyone about being transgender, let alone giving a speech in the shadow of The King Center. She moved from Los Angeles to Atlanta in 2003, around the time she was considering ending the silence in which she lived for more than 15 years.

“I was in the closet because I was fortunate enough to be one of the ones who could pass,” says McDaniel, who recently turned 40 and has been living as a woman since her late teens. “It was easier that way, just to blend in.”

McDaniel recognizes parallels between her experience and light-skinned blacks who avoided discrimination by passing as white, and says she realized it was time for transgender individuals to begin making more noise in order to be treated fairly by mainstream and gay society.

“I feel like we’ve been placed last on the list of everything,” says McDaniel, who has immersed herself in community activism since arriving in Atlanta. She is the transgender liaison for the Atlanta Human Rights Campaign’s diversity committee, serves on the Atlanta Police Department’s GLBT advisory group and is an associate board member for the Atlanta Pride Committee.

Last year she founded the Juxtaposed Center for Transformation, a transgender non-profit agency.

“I had to be comfortable expressing who I am and not apologize for who I am or being born transgender,” McDaniel says of how her activism sparked changes in her own life.

The nascent Juxtaposed Center for Transformation is creating an infrastructure that McDaniel hopes will make it a safe place for transgender individuals to receive group support, legal advice, counseling and referrals. She also expects the organization to chronicle transgender history, including the key role of transgender people in the Stonewall Riots.

MCDANIEL CONSIDERED HERSELF female for as long as she can remember, and her feelings were well known throughout her family, albeit never discussed. Throughout McDaniel’s childhood her mother made her read Bible verses condemning homosexuality, filling McDaniel with anticipation of leaving Sumter, S.C., when she turned 18.

Upon striking out on her own McDaniel stepped inside a Myrtle Beach mall that forever changed her life.

“I was walking through J.C. Penney and instead of walking to the male’s department I went to the female section where I’ve been shopping ever since,” she says. “I went home for [a grandmother’s] funeral and I did not change my dress or make-up, and my mother and I were having a conversation.

“I remember telling her the family was going to talk about the way I presented myself,” McDaniel remembers. “She told me if anyone had anything to say, they better keep it to themselves.”

Despite their earlier struggles, McDaniel says her mother eventually told her she loves her because she is her child, not because of her gender.

“Now my mother calls me her daughter when she’s introducing me to new people back home,” McDaniel says.
Posted by Monica Roberts at 3:46 PM