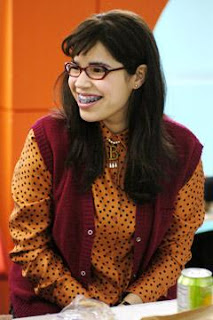 I started watching Ugly Betty when I was channel surfing one Thursday night and happene to see Vanessa Williams on the tube. When it was over I went to ABC's website to get more information about the show and get caught up on all the episodes I'd missed.

It was adapted from a popular Colombian telenovela Yo Soy Betty La Fea and is executive produced by Salma Hayek. They've had some big name stars doing guest spots on the show like Lucy Liu, Judith Light and others.

I have fallen in love with this show. It's well written, well acted and you enjoy rooting for Betty and her family. Even the antagonistic characters like Vanessa's delightfully backstabbing Wilhemina Slater shows a vunerable human side that makes you not hate her as much.

The basic plot of Ugly Betty is that a ordinary girl from Queens gets hired at a high fashion magazine by Bradford Meade as an executive assistant to his son, playa-playa Daniel Meade. Daniel has become chief editor in the wake of his brother Alex's mysterious death as the result of a skiing accident.

Bradford's thoughts are that she's the only woman in New York that he won't sleep with and he'll focus on the job at hand. Daniel initially resists, but is won over by Betty's bright ideas, sweet personality and intelligence. They discover that together they are an unbeatable team.

They need that togetherness. They are opposed by Wilhemina, who is still upset that she got passed over for the editor-in-chief position by Bradford after the mysterious death of their editor Fey Sommers, her toadying assistant Marc and the scheming receptionist Amanda. The Terrible Trio are always plotting and looking for opportunities to set them up for failure. Betty does have a friend at Mode in terms of the inhouse seamstress Christina, who knows everybody's dirty little secrets. She has also garnered the romantic attention of Henry the accountant.

Betty's home life isn't glamorous either. Her dad Ignacio and older sister Hilda constantly worry that she's setting herself up for a fall. Her show tune loving nephew Justin enthusiasically pushes his aunt to go for her dreams even as he criticizes her sense of fashion. She's still getting visits from her nerdy ex-boyfriend Walter despite her lukewarm attempts to convince him to stay away.

The plot just got thicker with the arrest of Bradford Meade, the appearance of his mother Claire who started drinking heavily after Alex's death and return of his brother with a twist. Alex is now his sister Alexis, played by supermodel Rebecca Romijn and has launched a hostile takeover bid backed by Wilhemina to gain control of Mode Magazine. It has been blunted for now by an injunction filed by Daniel.

Judging by the way that they've been handling the show so far, Ugly Betty will continue to surprise and delight me as the season unfolds.
Posted by Monica Roberts at 10:35 PM