Professor Emeritus John Hope Franklin Helps Teach Us Who We Are 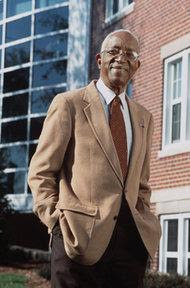 "We must go beyond textbooks, go out into the bypaths and untrodden depths of the wilderness and travel and explore and tell the world the glories of our journey." -- JOHN HOPE FRANKLIN.

Franklin’s many publications have focused on the history of the American South and on the African-American contribution to the development of the United States.

His best-known book, the pioneering and now classic "From Slavery to Freedom (1947; 8th ed. 2000)" revolutionized the understanding of African-American history and changed the way the subject is taught throughout the United States.

"It was necessary, as a black historian," Franklin once said, "to have a personal agenda."

Franklin also edited a number of books, including a 1997 autobiography of his father, an Oklahoma lawyer. Franklin was awarded the Presidential Medal of Freedom in 1995. His papers form the collection of Duke's John Hope Franklin Research Center for African and African-American Documentation.

Darlene Taylor, who has researched the African slave trade for several national and international educational projects, said she frequently turns to Franklin’s work for accurate accounts of black history.

"We should celebrate Dr. Franklin’s contributions to African history and his contributions to understanding the history of people of African descent," Taylor, director of the Middle Passage Legacy, told BlackAmericaWeb.com Monday.

Taylor said she often referred to Franklin’s books while researching the slave trade when she lived in Egypt during the 1990s.

"It’s important to celebrate Dr. Franklin’s work as he continues to tell our history," Taylor said. "Dr. Franklin provides a special perspective that should be heard."

A renowned historian and Medal of Freedom recipient, Franklin was appointed by President Bill Clinton in 1997 to chair the Advisory Board for the President’s Initiative on Race, created to begin "a great and unprecedented conversation about race" across America.

Franklin was a co-recipient of the $1 million John W. Kluge Prize for the Study of Humanity, awarded by the Library of Congress last year. Professor Franklin shared the prize with Princeton professor Yu Ying-Shih.

It is how humanity has impacted black Americans -- from the Civil War to civil rights -- that Franklin has studied and debated.

"It's not so much Katrina as a phenomenon as it's Katrina as a metaphor for what our society has become," Franklin told reporters last year. "It reflects; it's a mirror of what we've become -- super-extraordinarily complacent."

In 2001, Duke University opened the John Hope Franklin Center for Interdisciplinary and International Studies, which is dedicated to bringing together the nation’s social scientists.

Franklin was born on Jan. 2, 1915 in Oklahoma and was educated at Fisk and Harvard University, where he earned a Ph.D. He has taught at Fisk, Brooklyn College and the University of Chicago. In 1982, he was named James B. Duke Professor of History at Duke and was elected professor emeritus in 1985. From 1985 to 1992, he was professor of legal history in the Duke Law School.

Franklin's mother, Mollie, was a teacher, and his father, B.C. Franklin, was an attorney who handled lawsuits precipitated by the famous Tulsa Race Riot on 1921. A black man named Dick Rowland, stepped into an elevator in the Drexel Building operated by a white woman, Sarah Page. Rowland was accused of sexually attacking Page, which sparked the riots.

"When I was eight years old, people used to ask me what I wanted to be when I grew up," Franklin said in a speech at Duke University last year. "I said, ‘The first Negro president of the United States.’ "

In addition to his work as a historian, Franklin was involved in some of the key events of the civil rights movement. As an expert on Southern history, he was recruited by NAACP attorney Thurgood Marshall in 1953 to help prepare the brief in the landmark Brown v. Board of Education case before the U.S. Supreme Court. He also accompanied Dr. Martin Luther King Jr. on the march from Selma to Montgomery, Ala., in 1965.

"He's been, in many ways, like an African elder, a repository of wisdom, of tradition, and just a solid good sense, and a remarkable sense of humanness," Archbishop Desmond Tutu said of Franklin in a PBS documentary.

In 1978, Who's Who in America selected Dr. Franklin as one of eight Americans who has made significant contributions to society. In 1996, Franklin was elected to the Oklahoma Historians Hall of Fame, and in 1997, he received the Peggy V. Helmerich Distinguished Author Award. In addition, Franklin has also received honorary degrees from more than 100 colleges and universities.