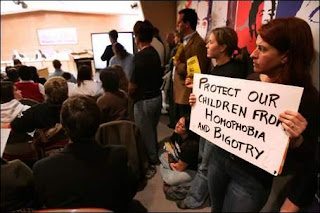 And I do mean ugly.

There were 50 speakers on both sides of the issue, a cantankerous overflow crowd of 400 people and hostile comments from both sides, but in the end a little after midnight the sexual orientation addition to JCPS policy passed on a 4-3 vote.

While I'm not happy we got cut out of it, I still got my shots in for gender identity coverage and some snide shots at the Reichers as well.

This was a long day for me. I went to the Fairness office to participate in a 3 PM EST press conference, then headed over to the Van Hoose Education Center to prepare to do battle with the Forces of Intolerance and their faith-based hatred. 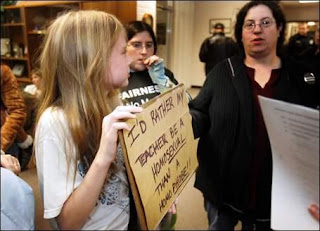 Hater Tots were on the menu for the anti side, washed down with 55 gallon drums of Hateraid. Rev. Jerry Stephenson slithered out of his cave along with several other Black ministers on the anti side. Of course I got my chance to speak 40 people into it and laid the verbal smackdown on the anti side and their selective use of scripture. I also pointed to the irony that the kids were more enlightened on the issue than the adults were.

The anti sides speeches were the usual gaybaiting Reicher talking points that I won't waste valuable bandwith repeating. Every time I heard on the anti speakers, I closed my eyes and imagined that I probably would have heard these people say the same thing about Black people 40 years ago.

Strike that. Many of this crew were the 'necks from deepest darkest Okolona and the South End of Louisville. Many of them forgot their pointy hooded choir robes.

This was more entertaining than some of the reality shows on TV, but sadder still because the raw hatred and ignorance of many peeps was on display tonight.

Posted by Monica Roberts at 1:44 AM