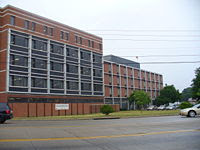 I haven't been posting much over the last few days because I've been doing research getting ready for the big school board meeting tonight at 7 PM EST.

Tonight the Jefferson County school board votes on whether to expand the employment protection policy to cover sexual orientation. There are 5 votes according to the Louisville Courier-Journal to pass that part of it. Larry Hujo, Joe Hardesty, Linda Duncan, Debbie Wesslund and Steve Imhoff (my rep) told the C-J they will support the proposal. Carol Haddad said she is undecided and Ann Elmore, who is the lone African-American member of the board and is part of the committee that recommended the policy change, did not want to comment.

Superintendant Berman told the C-J's Antoinette Konz that he thinks the district is behind the times on this issue.

"This is not new, and it is something that has been a long time coming."

The problem is the gender identity part. We want it to cover gender identity so that transgender employees are covered as well. Dr. Berman and a few board members are wavering on that part.

We've pointed out that out local Fairness ordinance covers gender identity, the language has been tested and upheld in the US Sixth Circuit Court, the most conservatiove of the US federal circuit courts, so I fail to understand why they don't used that language to cover 'errbody'.

The Forces of Intolerance will definitely have more people there tonight than the nine people they had at the hearing back on November 13th. One of the people that's on the anti side is a disappointment, the Rev. Louis Coleman.

He has been on the front lines for decades here in Louisville for social justice issues, but he joined the wrong side for this one.

Rev. Louis Coleman of the Justice Resource Center wrote in the November 16 issue of the Courier-Journal that 'he worries that expanding our school district's harassment and employment policies to protect against sexual orientation discrimination will open the door for gay and lesbian employees to push their beliefs onto students.

"I just don't think policies should be put in place to protect habits or behaviors."

Excuse me? You helped PASS the Fairness Ordinace back in 1999.

Despite the nattering nabobs of nekulturny negatism, here's hoping that the JCPS board does the right thing and votes to covers all of us.
Posted by Monica Roberts at 10:14 AM