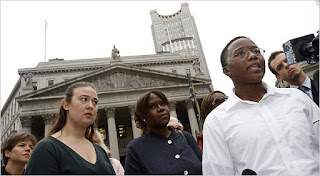 TransGriot Note: Here's an example of what I and Lambda Legal have been talking about in terms of the transgender-free ENDA the House just passed NOT covering everyone in the GLB_t community.

Check out this New York Times article about Khadijah Farmer and her lawsuit against a New York City restaurant for throwing her out of the women's restroom hours after the NY Gay pride parade because of the bouncer's PERCEPTION that she was a man.

Sexual Stererotypes, Civl Rights, and A Suit About Both

Yesterday, a New York woman filed suit against a West Village restaurant for being thrown out of a women’s room there by a bouncer who, she said, did not care she was really female.

The woman, Khadijah Farmer, 28, who lives in Hell’s Kitchen, said in an interview that she was at the Caliente Cab Company restaurant on Seventh Avenue with her companion and a friend after the gay pride parade on June 24 when she left the table to go to the women’s room. While she was there, a male bouncer burst in.

“He began pounding on the stall door saying someone had complained that there was a man inside the women’s bathroom, that I had to leave the bathroom and the restaurant,” Ms. Farmer said. “Inside the stall door, I could see him. That horrified me, and it made me feel extremely uncomfortable. I said to him, ‘I’m a female, and I’m supposed to be in here.’

“After I came out of the bathroom stall, I attempted to show him my ID to show him that I was in the right place, and he just refused to look at my identification. His exact words were, ‘Your ID is neither here nor there.’”

Ms. Farmer said she often is mistaken for a man, but her New York State nondriver photo identification card clearly lists her as female.

She said the bouncer followed her up the stairs and back to the table, asked her party to pay for the appetizers they had eaten and made them leave the restaurant.

Telephone calls to the management at Caliente Cab Company were not returned yesterday. The bouncer was not named as a defendant in the lawsuit.

The Transgender Legal Defense and Education Fund filed the lawsuit on behalf of Ms. Farmer in State Supreme Court in Manhattan. It accuses the restaurant of discriminating against Ms. Farmer because her appearance did not comply with society’s norms concerning gender identity.

A 2002 amendment to the city’s human rights law protects the rights of city residents whose gender expression is different from their sex at birth. The state’s civil rights law does not include a similar protection. But the defense fund argues that it should be interpreted as protecting New Yorkers against sexual stereotyping, in which people are expected to conform to gender-appropriate behavior.

Although Ms. Farmer is not transgender, the legal defense group considered the suit to be a strategically important case with the potential to set a precedent, said Michael D. Silverman, the organization’s executive director and general counsel. The lawsuit’s claims are being made under both city and state law.

The fact that the bouncer refused to look at Ms. Farmer’s identification card before ejecting her showed that he was judging her simply by how she looked, Mr. Silverman said.

Sexual stereotyping, he said, was expanded as a legal concept under a 1989 decision by the United States Supreme Court. In that case, Price Waterhouse v. Hopkins, the court found, 6 to 3, that a woman had failed to make partner at the accounting firm Price Waterhouse in part because she was considered too “macho.” The court ruled that male supervisors discriminated against her on the basis of stereotyped notions of appropriate female appearance and behavior.

Kenji Yoshino, a Yale Law School professor who studies gender and sexuality under the law, said Ms. Farmer’s claims were much stronger under the city law. “The New York City statute is so much more directly on point.”

Ms. Farmer said she is mistaken for a man on a daily basis — especially in bathrooms and locker rooms, where she often gets funny looks. “I have a script that is almost routine,” she said. “I say, ‘I am a woman, and I’m supposed to be here.’”

“Usually,” she added, “they are embarrassed.”
Posted by Monica Roberts at 2:17 PM

The Village sure has changed. I have heard about this case, and I just can't believe that this happened in my old stopping grounds.

I have heard though that the Village is undergoing gentrification and that has increased intolerence in the area.

I hope that she wins her case and that the jury really sticks it to the restaurant to send a clear message.

This is a perfect example of why gender/apperance/Transgender protections are needed.

The last time I visited New York was 2000. I noticed the fancy condos that were being built in the Village and the increasing tension between the Black and Latino GLBT kids and the new residents of the area.

I understand its gotten worse since my last visit.