Guest commentary by Jaison Gardiner
This was printed in the Louisville Courier journal November 27, 2007


Rev. Louis Coleman of the Justice Resource Center was quoted in the November 16 issue of the Courier-Journal that 'he worries that expanding our school district's harassment and employment policies to protect against sexual orientation discrimination will open the door for gay and lesbian employees to push their beliefs onto students.

"I just don't think policies should be put in place to protect habits or behaviors."

That's news to me since he was a Fairness supporter back in the day.

Fellow Frank Simon-flunkie Rev. Charles Elliott said that the fight for equal rights for LGBT people is nothing like the struggles of black folks during the civil rights movement. "We were fighting a race problem back then, not a habit or behavioral problem… Being (gay) is a choice. We didn't have a choice to be black, we were born that way,” he insists.

Being LGBT isn't a 'choice' as he disrespectfully put it either.

Mike Slaton, organizer for the Fairness Campaign of Louisville, said no one is suggesting that anti-gay bias is the same as racism. "Hate hurts no matter who it is directed at. We all deserve fairness regardless of our race, sex, creed, sexual orinetation or gender identity. No one chooses to be the object of discrimination."

While Mr. Slaton’s attempts at mitigating the gay rights movement are admirable, he is only half right.

Anti-gay bias is indeed the same as racism, sexism and the other isms. The fact is that all oppressions are linked and injustice anywhere is a threat to justice everywhere.

In our society, the heterosexual, middle-class, white Christian male is the benchmark against wich all others are measured. Generally speaking, the less one of us measures up to this standard, the lower we find ourselves on the totem pole of social justice and public opinion.

As long as some people believe its okay and have the misguided idea that their religion makes it's okay to discriminate against people, then it will be necessary for political leaders to pass civil rights protections for the low people on the societal totem pole.

Changing this negative paradigm demands that we all work in coalition with others (yes, even gay folks) in the social justice movement without leaving anyone behind.

LGBT people have no more of a choice in deciding our identity than black folks, heterosexuals or women. The only 'choice' we make is either to hide who we are or to live openly as gay, lesbian, bisexual and transgender people. Religion and political affiliation are choices that are currently protected by JCPS nondiscrimination policies, so why are Coleman and crew getting upset about the proposed addition of sexual orientation and gender identity to those policies? 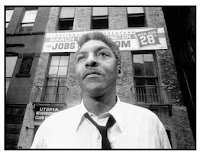 I’d like to point out to Rev. Coleman and those who think like him the story of Bayard Rustin, an influential black civil rights activist who did much of his work behind the scenes. Rustin was the principal organizer of the 1963 March on Washington in which Dr. King delivered his famous 'I Have A Dream' speech.

Only one problem. Bayard Rustin was gay.

Some of Rustin’s contemporaries in Dr. King's inner circle decided that Rustin’s audacity to be true to himself as an openly gay man overrode his blackness and diligent work for the movement and was a liability. Then-Senator Strom Thurmond and the FBI attempted to raise public awareness of Rustin’s sexuality and even circulated false stories that Rustin and King were romantically involved -- all inan effort to undermine the civil rights movement.

Those scare tactics worked in 1963. NAACP Chair Roy Wilkins wouldn’t allow Rustin to receive any public credit for his major role in planning the March.

Black LGBT people need to recognize our individual and collective power as a community. Gay and straight folks alike need to recognize that black LGBT people have always played and will continue to play important and indispensable roles in the struggle for the rights of all people, whether it be the labor movement, women's liberation and, even for the rights of blacks and Latinos in America.

It’s time that religious conservatives stop skewing the Bible to justify their hatred, fear and loathing of LGBT people.

And time’s up for all the cowards who sit idly by and don’t speak up against injustice and bigotry in our country. After all, as Edmund Burke eloquently said, the only thing necessary for evil to triumph is that good men do nothing.

A year before Bayard Rustin died in 1987 he said, "The barometer of where one is on human rights questions is no longer the black community, it's the gay community because it is the community which is most easily mistreated."

Actually, I think it’s both communities that are human rights barometers, and there are more similarities in their struggles than either would care to admit.
Posted by Monica Roberts at 3:18 PM

This is a great post, mainly because reading it makes me angry.

I get really frustrated when I run into the idea that discrimination and bigotry aren't something I can claim, not when I've lost (and failed to get) jobs that I was qualified for purely on the basis of "We don't want you."

Bigotry always sounds the same, regardless of the target. When you have someone with power stomping on someone with less power (or no power at all) it looks the same every time.

We heard a lot of that argument from the Reichers Monday night.

They holler about 'anti-Christian bigotry' but want to deny the bigorty and hatred againstGLBT people that's caused by their bullshyt.

And that's such BS, but there's a streak in fundamentalist Christianity that they're the victims, that society is biased against them, wants to stamp them out. This is convenient for raising outrage against identified enemies like GLBT people, but sounds really self-indulgent from the outside.

Anti-Christian bigotry like "not being Christian in the way they define" and "being someone who refuses to sit down, shut up, and be a good oppressed person."

I mean, I am not anti-Christian, but I am anti-bigot. :( I'm glad you gave better than you got, there. I'm sorry that transgender was excluded again.

Hi Monica, I know you posted this a while ago... I'm just curious about where that quote is from, the Rustin quote from 1987 about the barometer of human rights. I find Rustin a fascinating figure; I'd like to read more about him. (I just watched "Brother Outsider", the documentary about him, this morning!)
Thanks, Eva