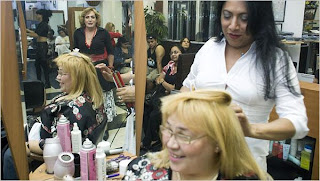 Plenty Of Hair, Nary A Mustache

Lupe’s Place is a shoebox-size beauty parlor and barbershop, wedged between a fried chicken shop and a party goods store, underneath the elevated No. 6 train on Westchester Avenue in the Soundview section of the South Bronx.

Thirteen miles from the city’s gay epicenters of Chelsea and the West Village, it seems an unlikely location for a popular salon where four of the eight hairstylists are transgender. Yet the salon is beloved among the men and women in the neighborhood, most of them Latino immigrants. 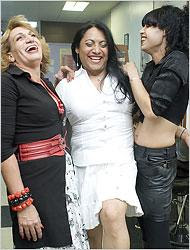 The salon was opened in 1993 by Lupe Gonzalez, the ninth of 13 children from a family in Puebla, Mexico. Ms. Gonzalez, who is 38, had arrived in New York six years earlier, at first doing deliveries for a Midtown restaurant and living with eight others in a cramped apartment in Soundview.

“I came as a boy, but I was very feminine,” said Ms. Gonzalez, smiling coyly and pushing back a lock of her long dark hair. “I used to have my mustache and short hair. I started changing in 1991 when one of my boyfriends said, ‘Grow your hair and shave your legs.’” She pursued her transition with electrolysis, hormones and makeup.

On that afternoon, the salon was permeated with bouncy salsa music and a heavy fog of hairspray. One of the transgender stylists, a 45-year-old named Emily Quiñones who was wearing thick mascara and Farrah Fawcett bangs, worked furiously on a customer’s hair with a blow dryer and a circular brush. Nearby, Lily Saldana bopped around in a leather miniskirt and high boots while molding a customer’s updo into heavily shellacked curls.

In the rear of the shop, Ms. Gonzalez brushed highlights onto a woman’s wet hair, while in the front, a handful of people waited their turn, among them a 63-year-old retired maintenance worker named Anibal Garcia. He started getting his hair cut at Lupe’s Place when it opened. Today, he said, he would not go anywhere else.

“Now my wife, my daughter, my sister-in-law, all my family come here,” Mr. Garcia said. “They’re professional. They do it perfect.”
Posted by Monica Roberts at 1:45 PM