TransGriot Note: This column originally appeared in THE LETTER in November 2004.

Well folks, by the time you read this the election should’ve already taken place. We’ll either be celebrating the fact that Bush is packing up for a one-way trip to Crawford or we’ll have four more years of mean-spirited misleadership to endure. I pray that the odious amendment to the Kentucky Constitution banning same-sex marriage died a horrible death.

Now, let’s get to the column.

One of the things that’s irritated me about the same-sex marriage amendment battle has been the use of sellout Black ministers to shill for them instead of Dr. Frank Simon and Company. 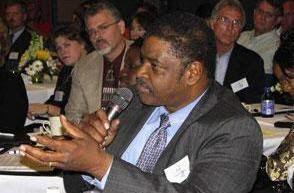 The Reverend Jerry Stephenson commented during a local September 17 rally that “gay rights activists have hijacked the civil rights movement and that Blacks don’t believe that homosexuals ought to be married.”

Speak for yourself, Rev. Jerry. I believe that if two people love each other and want to get married, it's their business. I could care less whether they’re the same gender or not. Neither the state of Kentucky nor the United States Congress should be attempting to enshrine intolerance in our constitution at the behest of Bible-thumping bigots. I’m in good company. Ambassador Carol Moseley-Braun, Coretta Scott King, Julian Bond, Rep. John Lewis, Dr. Henry Louis Gates, Rev. Al Sharpton, Dr. Joycelyn Elders, Whoopi Goldberg, and former San Francisco mayor Willie Brown are some of the folks with our skin pigmentation that agree with me. By the way reverend, I am also a Christian.

Let me get back to focusing on Rev. Stephenson’s ignorant assertion that gays have hijacked the civil rights movement. He and the rest of his fellow Stepford Negroes got that talking point directly from the Concerned Women for America, an organization that has been less than friendly to African-Americans and our issues over the years. 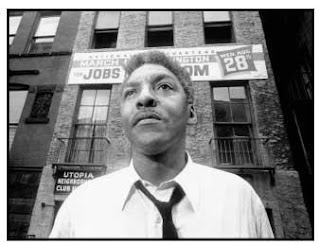 By the way Rev. Stephenson, since you were sleeping in class during Black History Month, let me hip you to the fact that gays and lesbians played a major role in the Civil Rights Movement. Can you say Bayard Rustin? I thought you could.

This gay Black man was not only a co-founder of the Southern Christian Leadership Conference with Dr. Martin Luther King, but was one of his principal strategic advisors. Rustin was the person who introduced Dr. King to Gandhi’s non-violence philosophy, the major ingredient in the series of campaigns that won passage of the Civil Rights Act of 1964. He was also lead organizer of the 1963 March on Washington in which Dr. King gave his immortal ‘I Have a Dream’ speech. 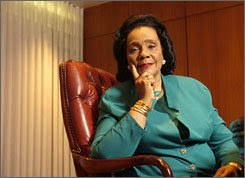 Coretta Scott King pointed out during a April 1998 speech to the 25th Anniversary Lambda Legal Defense and Education Fund luncheon that “Gays and lesbians stood up for civil rights in Montgomery, Selma, Albany GA, St. Augustine FL and many other campaigns of the Civil Rights Movement.” She said that “Many of these courageous men and women were fighting for my freedom at a time when they could find few voices for their own, and I salute their contributions.”

She also had this to say about gay rights and the civil rights movement: