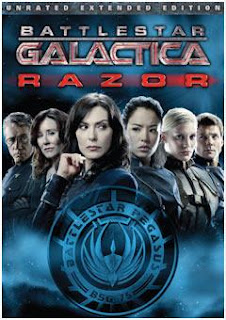 I can't wait for this two hour movie to be televised at 9 PM EST on Saturday night and I'm definitely getting the DVD when it comes out December 4.

I was checking out the prequel flashbacks on the SciFi Battlestar Galactica website that featured a rookie William Adama during the First Cylon War. The best part was it had a battle scene with old school Cylons and old school Cylon Raiders in them.

BSG-Razor will not only will be the backdrop for many of Season Four's events, which unfortunately will be the last season for Battlestar Galactica unless some peeps change their minds, it also fills in some backstory from previous BSG seasons as well. 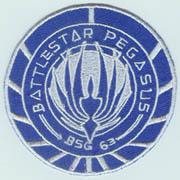 BSG-Razor takes us back to the day of the Cylon surprise nuclear attack on the Colonies, but tells the survival story from the viewpoint of the Pegasus and Admiral Helena Cain. The Pegasus was undergoing a refit and upgrade and was docked at the Scorpian Shipyards. The ship survived the Cylon nuke attack on the yards because its computers with Baltar's CNG program (that Number Six wrote a backdoor into that crippled Colonial defenses) were offline and Admiral Cain ordered a blind jump from the Scorpian Shipyards.

It will introduce us to a few new characters, bring back not only Admiral Helena Cain but Colonel Jack Fisk as well. It will give us some background on why Admiral Cain hates the Cylons with a passion. She especially hates Gina, the Cylon that infiltrated the Pegasus for an interesting reason. Speaking of passion, the rumors are flying that Admiral Cain will be coming out of the closet during this movie.

So I'm looking forward to checking this one out. I'll have plenty of popcorn on hand and leftover turkey sandwiches to munch on while I check out this movie on the SciFi channel.

Can't wait for Season Four of Battlestar Galactica to start, too. I want to find out what time period Earth is in when the Galactica arrives and if the Cylons are hot on their tails when they do.
Posted by Monica Roberts at 6:16 AM

I'll be watching this with my best friend, Melissa, at her place in Newport, TN. To us, this stand-alone BD movie is as highlu antisapated as were the Star Wars and Lord of the Rings movies. Enjoy the popcorn.

Monica,
I'll have to admit that I was one of the big critics when this reimagining of classic BSG came out in 2003.

The writing and the brillance of placing this in the context of our own society and time frame is what intrigued me. I often wondered what our society would be like if we had that type of spacefaring technology.

The fact I love Edward James Olmos as an actor was another factor as well along with the solid writing.

I also like Edward James Olmos - I admit that I did not really know much about him before BSG, but he's one of my favorites ever now.

I like how BSG sets up morally difficult situations and resolves them in ways that - with a slight change of context - would turn the heroes into villains. There's no strict line between good and evil, and nearly everyone is navigating through a gray spectrum.

Baltar's made one choice that could truly be evil, and it came from his own narcissism.

Thank you for posting this. I'd stopped keeping track of this stuff and didn't realize Razor would be on this Saturday.

Yeah, I am bummed that the BSGseason won't start unil April 2008, and that may be pushed back if the writer's strike isn't settled by then.


But it's cool thatthey are diving deep into the BSG backstory on this one. As Michelle Forbes said. there's so much BSG story left to tell

Hey, just watched Razor (advanced copy on DVD) and must say I was a bit disappointed. It's still good, but doesn't develop its characters or provide an interesting, cohesive story the way the series does. Read my review here...