'The Face' Model Devyn, Is Apparently So Light Skinned, She's International and Not Black 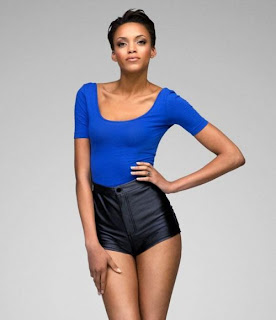 The latest guest post from Renee of Womanist Musings

Women of colour have always had a hard time in the modelling industry.  There have always been a few who have managed to have a successful career like Alec Wek, Naomi Campbell and Iman but by enlarge, despite their obvious beauty, their race has been a stumbling block rather than an asset.  The fact that population demographics are clearly changing, has not effected the fashion industries commitment to ensuring that White women, continue to be representative of womanhood.  This is not only racist but damaging to young women of colour.  Some cope with this racist treatment by internalizing negative concepts about their race.  The following is a clip from The Face, a reality show which appears on Oxygen.


transcript is below the fold

Wendy Williams: So, let's just get right into it, you guys are competing to the face of Alta. Devyn what do you have that Ebony doesn't have?

Devyn: I feel like I have the international look and I have a story that can relate to everyone.

Judge: She did good. She answered well

Wendy Wiliams: Ebony, you're only 21

Wendy Williams: And you have two children.

Ebony: Yes, I do. My children's fathers are the best dads ever.  They love their kids so much and they support me.

Wendy Williams: Are you still with either one of the babies fathers?

Ebony: I am not, but we're very close friends. It didn't work I was young

Ebony: and I am so glad that I went through it, because I know better now.

Judge: She's stirring it up

Wendy Williams: Devyn, what's it like to be a black girl model?

Devyn: I don't really consider myself as a Black girl model. I know what my ethnicity is but I'm fair skinned and I feel like I have an international look.

Devyn: No, that's not what I said whatsoever.

Naomi Campbell: What the fuck does she mean? That's a disgrace; she's a Black girl

Devyn: As soon as I finish answering my question, all I hear is Naomi bug out.  I'm scared out of my pants. I feel like I could have screwed it up for team Carolina.

Despite knowing her ethnicity, Devyn does not feel Black because she is light skinned.  Devyn is well aware that for the most part, light skin has a long history of providing opportunities for Black women which have long been denied darker skinned women.  This is not to say that light skinned women don't suffer from racism but that light skin functions as a privilege, thereby reducing the amount of racism that a Black woman has to face.  To be clear, this is not a case of someone who is bi-racial choosing to identify as both sets of her identity but a Black woman actively choosing to deny her Blackness because she thinks it will help her get ahead. It's misguided and clearly evidences the degree that she has internalized negative ideas about Blackness.

It clearly did not escape Devyn's notice that she was up against the dark skinned Ebony and this why she sought to engage in colorism to press an advantage.  Colorism has divided entire families, with darker skinned child made to feel less valued and loved. Colorism is a bane upon communities of colour and is a direct result of White supremacy.  Whiteness has falsely created a so-called elite definition of Blackness to encourage Blacks to fight for the scraps from it's table, even as it ensures that true equality is always out of reach.  Though Campbell is obviously a success in her chosen career, her reaction speaks volumes.  It was absolutely clear that through her comments, Devyn sought to place herself above her, despite Campbell's success and obvious achievement by nature of her lighter skin. She may have only intentionally meant her comments as an attack on Ebony, but the speak to a revulsion of all darker skinned women.  Just as White people can throw a slur to quickly change the dynamics of a conversation and assert power, light skinned people can do the same, though obviously with less personal profit because of a shared identity of Blackness.

The other matter I would like to address in this video, is the obvious slut shaming of Devyn by Wendy (you can't pay me enough to support a fellow Black woman) Williams.  Wendy of course shied away from using the word slut but by working hard to ensure that Ebony had to justify her reproductive choices, Williams might as well have.  In a world in which women's reproductive choices are always questioned (note: especially true when it comes to women of colour) Wendy sought to construct her as a hyper sexualized Jezebel.  At the end of the day, why does it matter how many children Ebony has, or who the father is?  Wendy's questions were not just "stirring things up", as the judge said, but directly designed to shame.  I can completely understand the shock and even disgust regarding Devyn's comments, but why are so few people speaking out about the inappropriate nature of Williams' questions?

The truth of the matter is that until Devyn defined herself as international and not Black, her light skinned body bought her an unspoken privilege.  It's not an accident that these to women were seated next to each other in competition.  It is also no accident that Devyn was given the clearly softball question and Williams sought to go for the jugular when she questioned Ebony.  The very nature of Williams' choice of questions reveals that she also has internalized patriarchal values of what constitutes a so-called good woman, as well as colourism.  Even in an interaction of all Black women, race and sexism are always omnipresent