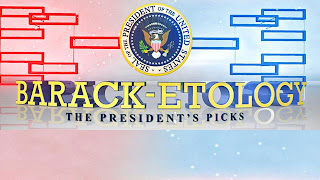 Well, you've seen my NCAA brackets for the 2013 men's and women's tournaments which have already taken a hit on the men's side with New Mexico being upset by Harvard (score one for Eli Blake) and Georgetown's shocking loss.

But my Final Four teams on my men's and women's brackets are still alive for now.

Here's what President Obama had to say about the 2013 NCAA men's and women's tournaments.