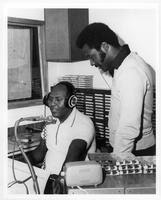 Was at the Houston hospice today when my father passed away at 12 noon CDT.

Didn't talk about it much on the blog, but my dad is a Black radio and Houston radio legend.

He's also one of the reasons why I have the public speaking skills I do right now since everyone from my various schools to my home church had me standing at their podiums since I was age 6 MCing their programs.

Dad even had me doing a commercial promoting his morning drive time radio show when I was in second grade.

Dad was a native Houstonian, and started his radio career at WBOK-AM in New Orleans.   He spent bulk of his radio career starting in 1967 in the Houston area at KYOK-AM as its program director and at KTSU-FM before he retired in 1993. 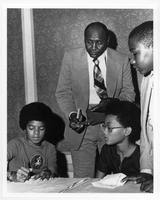 I had a ringside seat to much of the Houston Black radio world growing up.  KYOK had a ground breaking RV that served as a mobile broadcasting studio and I bounced around different areas of town to many of those remotes.

There were also a few nights when he brought that vehicle to the house pre or post remote and I got to sleep in it.

I also got to see firsthand the major love and respect many people had for him inside and outside the community because he not only was a proud Black man who stood up for his beliefs and was willing to do more than just talk about them, he was a voice for the voiceless in H-town.

And he was one heck of a play by play announcer  If ESPN had started a little earlier you probably would have heard him calling football and basketball games on that network.  As it was I did get to watch him call Texas Southern University and HISD football games from the Astrodome press box and see people like NFL Hall of Famers Walter Payton and Doug Williams play while happily sipping on my bottomless soda cup. .

I was also constantly amazed by the people he knew on a first name basis inside and outside the Houston area in the radio, music and political arenas.  That's probably a major reason why I have the deep interest in politics and I do what I do as a human rights warrior.

I'm comforted in the fact he didn't suffer when he passed away and his legacy in the industry will live long past the days when my family's tears have dried.

Many of his photos from his radio days are in the African American Archives of Music and Culture in their Black Radio collection housed at IU-Bloomington.  There have also been people writing tribute articles expressing how much he meant to them and their love for him..

Speaking of love, thanks to all of you who have lifted my family and I up in prayer, kept us immersed in your positive thoughts, and have been there at various times when we needed it during this difficult period for us.

My family still has heavy hearts and a difficult few days yet to navigate, but with your help we know we will.

Well Dad, you're not suffering anymore.  Say hello to Grandmother Tama for me.


TransGriot Note:  First photo from the AAAMC archives is a 1974 one of Dad and Shaft's Richard Roundtree in KYOK's studio.  The second one is Dad, Michael Jackson (yep, the future King of Pop), Pluria Marshall, Jr and the teen TransGriot during a KYOK sponsored 'Meet The Jackson 5' event in August 1974.

I'm sorry about your father's passing. You have my deepest sympathies.

Blessings and strength to you and your family! Carry on!