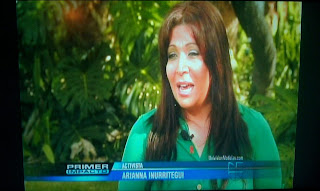 One of the reasons that my home girl Arianna Inurritegui Lint was at the Black Transmen, Inc conference in Dallas was to do a presentation about the Trans Latin@ Coalition along with doing a little networking. . 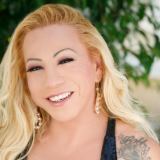 Its founding president is Bamby Salcedo, who I spent some quality time with in Philly last month.  Arianna serves on the executive board as the organization's East Co-Chair.  The other executive board members are West Co-Chair Brenda del Rio Gonzalez and Paola Coots.

The Trans Latin@ Coalition mission is to 'advocate for the specific needs of Trans Latin@ immigrants who reside in the US and plan advocacy strategies that would improve our quality of life.'

As the National Transgender Discrimination Study points out, trans Latinas are catching hell, too.  Then toss in discrimination and immigration status issues into that foul cocktail of transphobic oppression and you see the end result in the sobering NTDS stats.

The Trans Latin@ Coalition seeks to accomplish their mission by:

*  Having of trans-Latin@ immigrant leaders who advocate for the advancement and development of the quality of life of trans Latin@ immigrants who reside in the US.

*  Increase societal acceptance by providing visibility to our issues

*  Advocating for laws for protection, human and civil rights, , social and cultural inclusion

* Emphasizing that “Our Unity is Our Development”

The Trans Latin@ Coalition is an organization that is sorely needed in our trans advocacy circles.  It's also one the Trans Persons of Color Coalition, Black Transmen, Inc and Black Transwomen, Inc are eager to work in partnership with.  We do have some common problems in terms of the unemployment underemployment issues, anti-trans violence and sexual assault aimed at non-white transwomen, and visibility in the greater trans community as common ground issues we are motivated to work intersectionally to solve.


May the TransLatin@ Coalition have abundant success in fulfilling your mission to be the voice of immigrant trans Latinas.   Judging by what I saw in terms of Bamby's and Arianna's presentations I'd say you were well on your way to fulfilling that part of your mission.

May your voice also be heard and respected not only by the greater Latin@ community, but all the ones you intersect and interact with.  More importantly, may it be turned into governmental policy that will positively impact your lives.
Posted by Monica Roberts at 12:00 PM