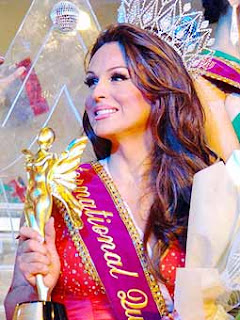 I was shocked to hear that longtime Texas resident and pageant community icon Erica Andrews died yesterday in Chicago of a lung infection.

Erica was born in Nuevo Laredo, Mexico, moved to San Antonio and became one of the most decorated queens on the pageant circuit.
Andrews performed at clubs in San Antonio, Dallas and Houston and her jaw dropping beauty and creative routines led to a long list of titles that include Miss Gay Texas USofA 1997, Miss Gay USofA 1999, Miss Texas Continental 2001, Miss Florida Continental 2004, Universal Show Queen 2004, Miss Continental 2004, Miss International Queen 2006 and Entertainer of the Year 2006.

She had less than a year ago moved from the Lone Star State to the Terre Haute, IN area to be with her significant other, and was a beloved and respected person in Texas and around the TBLG community.   .

As the news has spread, commentary from her peers and all who loved her has come pouring in on her Facebook page for this community icon who will be sorely missed.

She will be missed! Rest In Paradise!