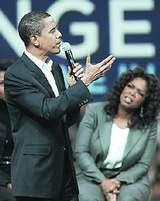 TransGriot Note: Excellent column in the C-J by Betty Winston Baye. Seems like some of her pale fans don't like the fact she's supporting Obama.

Oprah Winfrey has been called out as a racist. That's the fad now, you know -- to brand as racists African Americans who love themselves and seem in general to also love their people.

So now, Oprah is getting her comeuppance. Who does she think she is, detractors ask, to be openly supportive of Barack Obama in his bid to secure the Democratic Party's presidential nomination?

Oprah is showing her "true colors," one critic said, as if Oprah's "true colors" have ever been in doubt?

The mere fact that she is revered by millions of every race the world over shouldn't reduce her to being a slave to others' fantasies.

The idea that Oprah somehow unfairly favors black people over others belies her public record.

Who was he before Oprah took a liking to him and rewarded the help that he gave her during a very difficult time in her career, by regularly featuring him on her show, and then by spinning Phil McGraw off into his own show? Today, McGraw is a millionaire several times over, and the last I knew he was very white.

Here lately, every time you turn Oprah on, there's "Dr. Oz," and he's not black.

Or, how about the many scribes, living and long dead, but decidedly not black, whose books Oprah has catapulted into the realm of bestsellers. In fact, most authors that Oprah has championed over the years aren't black and aren't writing about black topics. That's true even in this era, when more blacks than ever are writing and buying books.

Those who've held their head trials and have found Oprah guilty of betraying them by backing Obama should ask Oprah's legion of non-blacks (cooks, personal trainers, designers, wedding planners and actors who are now living the lives that they dreamed of, in large part because a black woman smiled on them) whether Oprah is a racist.

Or how about the fact that any number of black artists have recorded Christmas CDs and no doubt would have loved Oprah's blessings. Yet Oprah chose to anoint Josh Groban's as the must-have Christmas CD for 2007. I doubt that, on the way to the bank, he's thinking Oprah is a racist.

Meanwhile, who has ever confused O magazine, to which I am a faithful subscriber, with Essence, Ebony or Jet?

The attacks that Oprah has endured for supporting Obama, unfortunately, aren't surprising to those of us who are aware that, in order for some people to really admire a black person, that black person must never be "too" black, which explains why any number of black people in public life -- at no small price to their mental health, I should say -- invest a lot of energy fleeing from the obvious.

Oprah has given her reasons for supporting Obama. Yes, he and his wife are fellow Chicagoans and dear friends. But she also has said, "We need somebody who is committed to the welfare of all Americans… We need a new way to do business in Washington, D.C., and in the world."

And for sure, a lot of Americans share those feelings.

Meanwhile, Oprah has said that she never has openly supported a candidate before, but that she's doing it now because, she said, and rightly so, "If we continue to do the same things over and over, I know you get the same results."

And yes, for Oprah and millions of others, and not all of them black people, Barack Obama is, in fact, the substance of things hoped for.

If George W. Bush, whose lack of qualifications should be painfully obvious to all by now, can be considered fit for the presidency, surely Obama has every right to aspire to the job.

Even so, Obama doesn't have a lock on the black vote, just as it cannot be argued that Hillary Clinton has the women's vote all locked up. Clinton's black support runs deep and strong. Scores of African Americans, including Maya Angelou, one of Oprah's dearest friends, have thrown their support to Clinton. Angie Stone, in a song titled "My People" on her new CD, has gone so far as to include Bill Clinton on the list of "My People."

Are Oprah's attackers equally upset that there are women who support Hillary Clinton chiefly because she's a woman and because they believe that it's time for a woman to be in the White House, not merely as first lady but running the joint?

Oprah's critics, I do believe, need to search their own souls for good answers as to what exactly is offensive to them about a black woman supporting a black man's aspirations. And while they do that, other Americans are simply deliriously happy to have options that we haven't seen in a while.
Posted by Monica Roberts at 2:24 PM

Funny how Arnold the Barbarian never got labeled racist when he supported both Bushe's run for the white house.

Nope,
When a celebrity openly supports a Republican, nobody complains.

When that celebrity openly supports a Democrat, then it's a problem.

Is it wrong for me to be sitting here thinking, "Hmmm, I think they all just realized that Oprah isn't the (Black) person they thought she was"?

Insightful article and it should be required reading for all of us.

Lady J,
Methinks they thought they had another Condoleezza Rice on their hands.