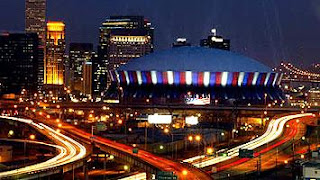 Congrats to the LSU Tigers, who won another national championship at their dome away from home in New Orleans by beating down Ohio State 38-24. The 2003 BCS title game the Bayou Bengals won was also played in New Orleans as well. 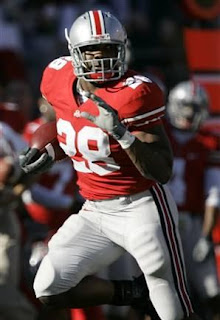 As for poor Ohio State, who is now 0-9 in bowl game competition against SEC schools, it's kinda obvious to me as someone who grew up watching SEC and SWC-Big 8-Big 12 football what Ohio State needs to do to change this situation.

Build a team that can beat an elite SEC school.

I get to see a lot of televised Big Ten football games since moving up here to Da Ville. I have Indiana up the road from me in Bloomington, Purdue a little farther up I-65 in West Lafayette and Ohio State is a six hour drive from me as well. I also get to see a lot of SEC games with Kentucky playing only 76 miles east of here in Lexington and Vanderbilt 2 hours south of me in Nashville. 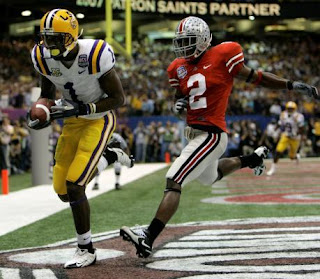 One thing I've noticed is the glaring difference in speed when you compare the two conferences. Ohio State teams are built to play three yards and a cloud of dust Big Ten football. The pass is more of a surprise weapon in the Big Ten rather than a creative, integral part of the offense as it is in other power conferences like the SEC.

Speed kills, and since SEC teams have it across the board in abundance, they play a faster tempo game. Everything in the SEC is geared to utilize or stop that speed. If you noticed last night, LSU corners were shutting down Ohio State receivers by playing lots of one-on-one man coverage. If that had been an SEC, Big 12 or Pac 10 team team they couldn't have gotten away with that for an entire game. 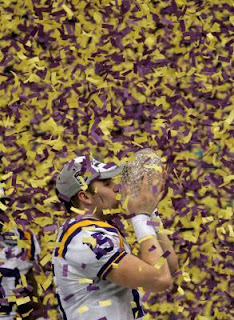 While what I've stated is obvious, it's easier said than done. LSU teams are built with some of the high-quality Texas high school talent that somehow manages to escape the Lone Star State like LSU quarterback Matt Flynn, who is from Earl Campbell's hometown of Tyler, in addition to the best Louisiana high school players.

While we get Big Ten games televised there, most boys grow up wanting to play for the Longhorns (yecch), Texas A&M, other instate Texas schools or another Big 12, Pac 10 or SEC one. Ohio State's not high on the list of schools for an elite Texas player who has the speed they covet and need to play there. 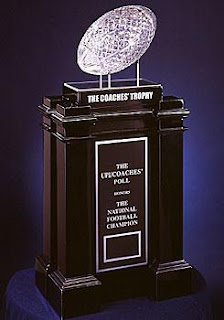 LSU is more attractive to Texas high school players because it's closer to Texas (especially the talent rich Houston metro area, the Beaumont-Port Arthur-Orange Golden Triangle and East Texas), has the allure of New Orleans being only 60 miles from Baton Rouge, and has won some titles recently.

Not to take anything away from Ohio State, they're an elite program. They've won a title and made it to the BCS Championship game in back to back years. That's a major accomplishment and they're doing something right. But for Ohio State to take that BCS trophy back to Columbus will require them to build a quick, versatile team that can do more than just win in the Big Ten.
Posted by Monica Roberts at 3:55 AM