Regina Gazelle- More Than a Woman 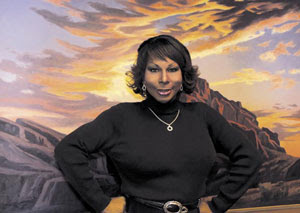 Almira Enos had used meth since she was 13 years old. To get drugs, she would often prostitute herself. She was born a man, but always knew she was supposed to be a woman. Her own mother told her so. Her confused gender state fueled the chronic drug use. She often felt lost and suicidal. Enter Regina Gazelle, Echo’s Woman of the Year.

In April, Enos met Gazelle, who helped the now 26-year-old clean up and learn how to live in her own skin. Enos enrolled in Gazelle’s halfway house for transgender girls, “This Is H.O.W. (Honesty, Openmindedness, Willingness),” and today is sober and even has a job.

She credits Gazelle with her remarkable transformation.

“I don’t think I would have sobered up without Regina,” Enos said. “If it wasn’t for her and this halfway house, I don’t think I’d be here now. I know she’s always there for me.”

With Enos’ gratitude, tears spill from Gazelle’s eyes. The pair embrace and Gazelle, who has helped at least 15 other girls with similar stories, speaks from her heart about the miracles she’s seen occur since opening the halfway house in February.

“I feel blessed to be able to intervene in the ripe ages of their youth,” she said. “It wasn’t until I was 40 that I realized I needed to change. It’s a miracle I have reversed everything.”

Gazelle’s story reads much like the stories of other women born men. She knew early in life she was supposed to be a woman. Seeing Tina Turner on Ed Sullivan and learning of Christine Jorgensen’s very first sex change operation cemented this feeling. She came out as a woman to her family as a transsexual. They institutionalized her.

Young adulthood led to drug use, prostitution and more than one jail stint. She was raped and often beaten. Sometimes she did the beating. She says she still has scars all over her body from the various traumas she endured. This behavior lasted about 30 years, until a judge scared Gazelle straight. He told her if he ever saw her in his court again, he’d send her to prison and throw away the key.

She’s now been sober for about 10 years and decided early in sobriety she would take the second chance she was given and use her story to help and inspire people.

“One of the reasons I work so hard at helping people is because for most of my life, I contributed to killing them or ripping them off,” Gazelle said. “This is my way of paying society back and making amends. I’m a walking miracle. God is using me in a remarkable way.”

One person who has been with Gazelle every step of the way is Community Church of Hope’s Rev. Patrick Stout. Stout ministered to Gazelle during her last jail stint and never left her side.

“Even though she is sometimes a diamond in the rough, she has the passion that gets the job done,” Stout said. “There’s not the word impossible in her vocabulary. When she has a dream, she just goes out there and does it. She’s a fantastic woman.”

Gazelle, who has been with husband Casey for seven years, is also a very popular entertainer throughout the community. Her work with transgender girls and on stage helped earn another accolade this year, Co-Grand Marshall of 2008 Phoenix Pride.

She found out about being named Co-Grand Marshall and her Woman of the Year for Echo nomination on the same day in late November. She is the first transgender woman for both honors.

“The best thing about it is people are not only acknowledging me, but they are letting me know I am appreciated for what I am doing,” Gazelle said. “Mostly it shows doors are open for us. It’s good to be first. It’s a good incentive.”

Gazelle knows some people still judge her when they find out she was a man. It comes with the territory, she said.

“I’ve never hid what I am,” she said. “A lot of doors have been slammed in my face. But when one closes, another opens. You aren’t going to get everyone to like you, but you can tell people who you are. I don’t have a problem with being me.”

Her positive stance about who she is is not lost on the girls, she helps, who all say they’d be in a much different place if not for Gazelle.

“Without Regina, I’d either be in prison or dead,” “This Is H.O.W.” house manager Allison Hultstrand said. “I was very volatile before I came here.”

“I never had a family that actually cared,” Annette Ellis added. “I am a lone person. I have no family except for Regina.”

Gazelle is excited about the future. She will continue her work with “THIS IS HOW,” blaze a trail on stage and maybe even adopt children if she can get Casey to go for it. She’s also thinking 2008 will be the year she completes the surgery to erase the traces of her former manhood.

“I used to think I might die if I do not become a woman,” Gazelle said. “Today I am positive, strong and outgoing. I know how to get what I want and if I don’t, I know how to ask. God works through me. I know now, after everything that was bad in my life, what my calling is.”

Reach the reporter at editor@echomag.com.
Posted by Monica Roberts at 5:47 AM