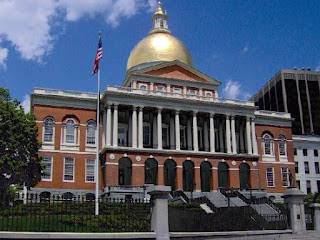 TransGriot Note: Here's hoping that the Massachusetts legislature joins the thirteen other states that have codified transgender protections into law.

Boston - Soon after he started to transition between genders in 2003, Ethan St. Pierre was fired from his job as a security manager for a protection services company. Since then, St. Pierre, 46, of Haverhill, has been between jobs, which he says are hard to come by because the company keeps providing bad references for him. "I'm constantly out," he said. "My field is closed off to me. They think there's something wrong with me."

St. Pierre and others are hoping Beacon Hill can do something about job discrimination against transgender people, pushing legislation (H1722) that amends anti-discrimination laws.

The word "transgender" is an umbrella term for people who are transitioning from their sex at birth to the gender they see themselves as, according to gay and lesbian activists. While the Massachusetts Commission Against Discrimination has already said state law protects all individuals, including transgender people, from
discrimination, activists say they want to codify the protections into law.

The issue has emerged as a top priority for gay, lesbian and transgender advocates, fresh off their victory in defeating an anti-gay marriage amendment. Activists held a briefing Wednesday for lawmakers and their aides on the legislation.

Sen. Stanley Rosenberg (D-Amherst) attended, as did several bill sponsors, and aides to Sen. Anthony Galluccio (D-Cambridge) , Rep. Paul Donato (D-Medford), and Sen. Steven Panagiotakos (D-Lowell). Manning the information table outside, Shea Spencer Hardy, a 22-year-old who goes to the Berklee College of Music for music therapy, said, "I would feel a lot safer living here if there were those protections. "