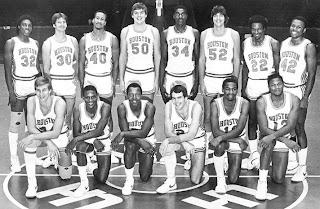 Well, since UCLA declined to schedule UH for a game commemorating today's 40th anniversary of 'The Game of The Century', I'm going to give props to another historic Cougar team that's celebrating a bittersweet anniversary, Phi Slama Jama.

25 years ago, the brothers of Texas' Tallest Fraternity slam-dunked their way through NCAA competition during the 1982-83 season all the way to a return trip to the Final Four. We Cougar fans (and the city of Houston as well) were fired up over the possibility that this team may finally break the championship jinx that Houston sports teams on the college and professional level were laboring under. 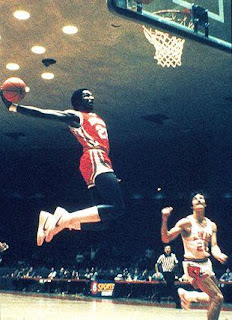 They were a homegrown bunch, Everyone with the exception of Hakeem (then Akeem) Olajuwon and Benny Anders were either from Houston or the 713 area code.

They were an entertaining team to watch as well. Think the collegiate version of the LA Lakers 'Showtime' team. They'd run you to death, play trapping, smothering defense, and heaven help you if they blocked your shot or stole the ball from you. The fast break would quickly go the other way and end with a basket as they dunked around, over and through you.

The last team to beat them before they started their monster run through the NCAA was a Dwayne 'Pearl' Washington led Syracuse one at the Carrier Dome in December. The Coogs swept undefeated through the Southwest Conference, finished the regular season ranked number one in the AP poll, won the SWC tournament title, and secured the number one seed in the 1983 NCAA tournament.

They defeated Maryland (at the Summit), Memphis State and Villanova enroute to Albuquerque and a high-flying showdown with the 'Doctors of Dunk' from Louisville. I remember we were extremely nervous on campus that week about facing the number 2 nationally ranked Cards. After that dunk filled 94-81 victory we felt good about our chances to take home the title after NC State knocked off a Georgia team that featured Dominique Wilkins.

I felt good about it as well. The campus electricity was fired up and so was the city. A local club DJ named Captain Jack did a rap song about the Coogs that was in heavy rotation on Majic 102, Love 94, KYOK and KCOH. In our campus bookstore that Monday the Phi Slama Jama t-shirts were already being stacked and prepared to press the words 'National Champions' on them.

One of the girls who worked back there was from North Carolina and a major Tar Heel fan. I was teasing her about Georgia knocking off North Carolina, and told her I'd be back tomorrow morning to pick up my championship shirt.

Well, everybody knows what happened to my boys that night. I still get sick to my stomach every time I see the replay of that damned Lorenzo Charles dunk and how agonizingly close Benny Anders came to stealing the ball and going the other way for an uncontested dunk.

I had to pick up a novel for an English class and was trying to get in and out before my NC friend got there. She was lying in wait for me as she asked, "You still want your championship shirt?"

Walking around campus that somber Tuesday was like being at a funeral. Even the pep rally that was held at Robertson Stadium for the team later that day was an anti-climactic disappointment. We students were even more upset after we found out that had the Coogs won the game, the administration was going to cancel classes that day. 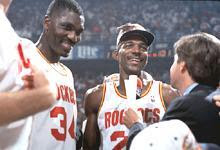 But I did finally get to see Hakeem and Clyde win a title in a Houston uniform. It was as members of my beloved Houston Rockets, not the Houston Cougars. While I reveled in the joyous city wide celebration of that second Rockets title, I dearly would have loved to experience that feeling of having a team you root for win a title in 1983, not 1994.
Posted by Monica Roberts at 6:52 AM