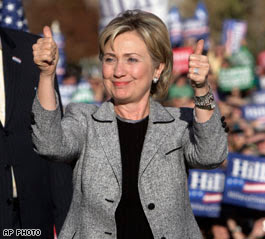 New Hampshire has been very good to the Clintons. In 1992, Bill's second place finish to Paul Tsongas of Massachusetts earned him the nickname 'The Comeback Kid'. His campaign reenergized, Clinton swept the Super Tuesday primaries a few weeks later enroute to the Democratic nomination and eventually the White House.

His wife Hillary is hoping for similar results after she made history by confounding the polls and narrowly winning the New Hampshire primary last night. She became the first woman and first former First Lady to ever win a presidential primary election.

"I come tonight with a full heart," Sen. Clinton told a crowd of supporters in Manchester. "Over the last week, I have listened to you, and in the process I found my own voice.

"Together let's give America the kind of comeback that New Hampshire has just given me," Clinton said, as supporters chanted "Comeback Kid!"

"We're going to take what we learned here in New Hampshire and make our case," she said. "We are in it for the long run!"


Sen. Obama finished second and conceded victory to Clinton, speaking to a crowd of supporters who were yelling, "We want change!"

"You can be the new majority who can lead this nation out of a long political darkness -- Democrats, Independents and Republicans who are tired of the division and distraction that has clouded Washington," Obama said.

"If we mobilize our voices to challenge the money and influence that's stood in our way and challenge ourselves to reach for something better, there's no problem we can't solve -- no destiny we cannot fulfill," he said.

This is shaping up to be a struggle now between Sen. Clinton and Sen. Obama all the way to the Mega Tuesday primaries on February 5. The next events on the Democratic side will be the Michigan primaries on January 15 and the Nevada Caucuses on January 19.
Posted by Monica Roberts at 5:38 AM