Lambda Legal announces the Garner Fellowship as it prepares to celebrate the fifth anniversary of Lawrence and Garner v. Texas, the landmark U.S. Supreme Court decision, in June 2008.'

New York, January 8, 2008
Lambda Legal is proud to announce the establishment of the Tyron Garner Memorial Fellowship for African-American Lesbian, Gay, Bisexual and Transgender Civil Rights, named for one of the men in Lambda Legal's landmark lawsuit that overturned existing sodomy laws across the United States.

Through the program, Lambda Legal hopes to extend its current work serving people of color, and to increase the diversity of attorneys working in the movement for LGBT rights by mentoring law students who intend to focus on those issues within the African-American community. The Garner Fellowship will address the intersection of LGBT discrimination and racism, sexism, and poverty that affects African-American LGBT communities.

The fellowship committee is looking for candidates who have first-hand understanding of the issues that affect communities of color and have experience working with LGBT and HIV issues within the African-American communities.

"Tyron Garner didn't set out to be an activist," said Lambda Legal Executive Director Kevin Cathcart. "But he had the courage and conviction to stand up to an unjust law. Because of his challenge to the Texas sodomy law, the U.S. Supreme Court recognized that love, sexuality, and family play the same role in gay people's lives as they do for everyone else. His struggle will have a lasting impact for all of us, gay or straight, who value our constitutional rights."

The fellowship is a tribute to Garner, an fellow Arican-American man and Houstonian who died in 2006 at the age of 39.

For more information on the fellowship, go to: http://www.lambdalegal.org/about-us/jobs/attorney/tyron-garner-memorial-fellow.html

On September 17, 1998, Harris County sheriff's deputies burst into a Houston apartment and discovered Garner getting intimate with John Lawrence. 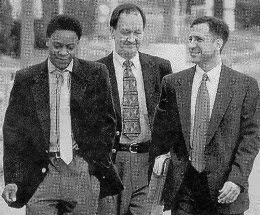 The arrests stemmed from neighbor Roger David Nance's false report of a "weapons disturbance" in their home — that because of a domestic disturbance or robbery, there was a man with a gun "going crazy." Nance had earlier been accused of harassing the plaintiffs.

Both men were arrested and charged with violating Chapter 21, Sec. 21.06 of the Texas Penal Code, the 'Homosexual Conduct' Law. They eventually appealed their case, Lawrence and Garner v. Texas, to the U.S. Supreme Court, where Lambda Legal's victory swept away sodomy laws remaining in 13 states, and vindicated the constitutional right to privacy between consenting adults.
Posted by Monica Roberts at 3:33 AM