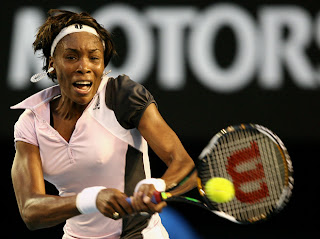 The first Grand Slam event of the 2008 tennis season is being contested Down Under. My girls Venus and Serena Williams start the season ranked seventh and eighth in the world. Oh yeah, bad news for the doubles tandems on the circuit, they plan on playing doubles in some Grand Slam events this year, starting with the Australian Open.

The Australian Open kicked off on January 14 and runs through January 27. As those of you who took fact-based science know, it's summer in Australia and the rest of the Southern Hemisphere. (Now that I've gotten my free shot at the fundies in, I now return you back to your original post.) 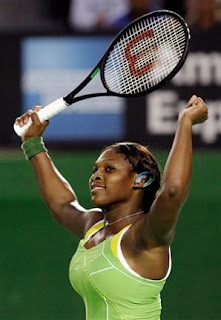 Looks like the draw is set up for a potential Serena vs. Justine Henin final, but Henin has Maria Sharapova on her side and they're on track to meet in the quarterfinals. The defending champ Serena has a potential quarterfinal match with Jelena Jankovich looming on her side of the bracket.

Serena is still alive as of this posting. She hasn't dropped a set enroute to her fourth round match with Nicole Viadisova. Venus is still alive and plays her third round math today with India's Sania Mirza.

On the doubles side they've already knocked off the Number 2 seeded doubles tandem and in good position to win their third Grand Slam doubles title.

Ladies, here's hoping for a great start to the season for both of you.
Posted by Monica Roberts at 6:43 AM

Heh. I think Venus won that match not long ago, now.

Thabnks for the heads-up. Serena is indeed playing that quarterfinal match with Jelena Jankovic.

Venus will play her 4th round match against Marta Domachowska