Impressions Of The Trans 100 Class of 2015 Reveal Show

For the first time I got an opportunity to actually be in the Mayne Stage house for the third edition of The Trans 100.  I congratulate every honoree who was named in the Trans 100's Class of 2015 including my Louisville homegirl Dawn Wilson.

As a 2013 honoree I have been pleased and proud to see this dream of Toni D'orsay's grow to become a much anticipated event thanks to Jen Richards' efforts.

But because Toni and I are friends, we have had long discussions over the last two years on the direction of it and where she would like it to go.

Not only was Toni not happy about what transpired at the 'Chicago Trans Advocate Awards' last night, neither was I.

While I also with everyone else in the audience enjoyed emcees Precious Davis and Myles Brady AKA the #TransObamas, when it came time to read the names for the Trans 100 Class of 2015, I was shocked to note that in a 2014 year in which trans inclusive non-discrimination ordinances were passed in Houston and Plano and a court case that erased the transphobic Littleton precedent happened, for only ONE Texan (Lauryn Farris) to make the list was a travesty.

It also has the problematic smell of homerism when 8 Chicagoans make the 2015 list, including one of the current board members of the Trans 100.

Under Toni's original vision, she and Jen didn't allow themselves to be added to either previous Trans 100 class out of transparency

Something else that is problematic was adding Leslie Feinberg posthumously to the list.

That opens the thorny question of if you add Feinberg, then who else should be added for lifetime work?   Sylvia Rivera?   Marsha P. Johnson?   Marcelle Cook-Daniels?  Alexander John Goodrum?  Where do you draw the line?

Toni's Trans 100 vision also called for the list to diverse not only in ethnic terms, but regionally as well, and it appears that neither happened last night either.

I loved being able to see Tona Brown perform live for the first time ever.  Enjoyed Laura Jane Grace, and seeing Rocco doing his thang on stage as well.   Tiq's keynote was first rate and loved seeing his wife Kim again.
.
Loved talking to Gloria Allen, and have a standing invite to spend some quality time with her the next time I'm in Chitown. 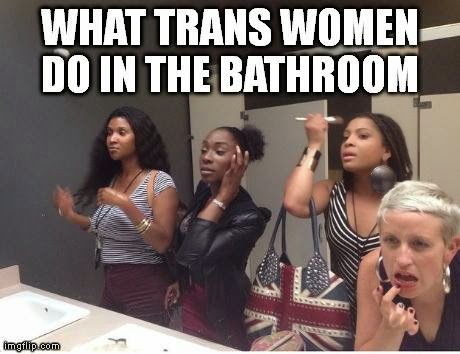 I also got the opportunity at the after party at The Glenwood to meet Kristen, our blonde haired  trans ally in the bathroom meme I created from a pic someone sent me.

And thank you for letting me know you appreciate my work as well to all the peeps who told me how much they enjoyed reading TransGriot.

Yes, I'm still an enthusiastic supporter of the Trans 100 for being a FUBU trans community production.  But at the same time I'm concerned about the problematic direction that the Trans 100 has taken in the absence of its visionary creator, who was busy caring for her terminally ill husband.

I hope that in the 2016 edition of the Trans 100, those problematic mistakes won't be made again.
Posted by Monica Roberts at 12:00 AM