When I last checked in on the case of Mississippi silicone pumper Tracey Lynn Garner, she was now facing two charges of depraved heart murder for the March 2012 deaths of 37 year old Karima Gordon of Atlanta and the January 2010 death of 23 year old Marilyn Hale of Selma, AL due to silicone butt injections that went horribly wrong..

40 year old Natasha Stewart, an adult entertainer known as 'Pebblez Da Model' went on trial in Jackson, MS January 27 for her part in the death of Karima Gordon.

She had accepted $200 to refer Gordon to Garner for the silicone pumping procedure and falsely claimed Garner was a nurse.   Stewart herself had been injected 20 times in the last seven years to create the signature pumped 48 inch derriere she possesses courtesy of Garner.

Stewart had been charged with "depraved-heart" murder, which is defined as one committed with a callous disregard for human life.   Depraved heart murder carries a sentence of life imprisonment, but the jury convicted her on January 31 of the lesser charge of culpable negligent manslaughter. 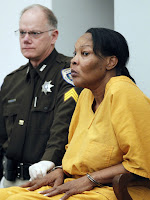 Stewart was facing 20 years, but was sentenced on February 14 by Judge Bill Gowan to 15 years with 8 years suspended on the manslaughter charge and 5 years on the charge of conspiracy with both sentences to run concurrently.    Translation:  She'll be locked up for 7 years and has 8 years suspended.

As for Garner, her trial was supposed to start after two resets on March 17, but it looks like it has been reset again since I have yet to find any news stories concerning a trial or conviction.

If I discover any new information concerning the Garner case, I'll pass that information along.