Shut Up Fool Awards-Church Of The Real Edition 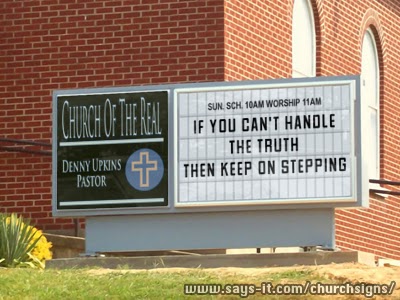 It's Good Friday, and we head into the 2014 edition of Easter Sunday poised to celebrate as Christians the death and resurrection of Jesus Christ.

It is also Friday, and that means it's time for my weekly exercise in calling out the mind numbingly stupid, the willfully ignorant, the over the top arrogant and the jaw dropping hypocrites and give them the Shut Up Fool Awards they so richly deserve.

It's time for our own Good Friday service in the Church Of The Real, run by Founding Pastor Denny Upkins.  So fire up you favorite gospel music to call out fools with as we launch into this week's edition of the Shut Up Fool awards.   BTW, the love offerings for this service can be dropped in the TransGriot tip jar.


Honorary mention number one is Steve Maltzberg, who less than 24 hours after Chelsea Clinton announced her pregnancy, this Pharisee decided to violate commandment number 9 and bear false witness against thy neighbor by claiming that Chelsea's pregnancy was a Hilliary campaign ploy.

Honorary mention number two is all the racist bigots who sent home run king Hank Aaron hate mail after he was asked in an interview why he kept all the hate mail he received during his 1973-74 run to break Babe Ruth's home run record   "To remind myself that we are not that far removed from when I was chasing the record. If you think that, you are fooling yourself. A lot of things have happened in this country, but we have so far to go. There’s not a whole lot that has changed.”

And the bigots promptly proved his point.

Honorary mention number three is Congressman Ted Yahoo Yoho (R-FL) who implied to an African-American constituent that he doesn't believe the landmark Civil Rights Act of 1964 is constitutional.  After he started getting called out about it, then put out a statement trying to clean up the mess he made.


So tell me/  How's that GOP African-American outreach working for y'all again?

Honorable mention number four is Twitter user Sarah who found out why you don't tweet terrorim jokes at an airline.   During my pre 9-11 airline days I had three people I had to call the cops on for telling terrorist jokes at my gates. Gate agents are quite aware of the fact we are the last line of security between the terminal, the airplane, the passengers and crew and we took that responsibility seriously.

TransGriot PSA:  Don't tell those terrorist jokes while transiting US customs, TSA security or at your departure gates.  It will not be a good day for you if you do so.

Honorable mention number five is a blast from the past in Phyllis Schafly.   The Stepford Republican parted her lips to say that the pay gap between men and women needs to be maintained so women can find suitable husbands.

This week's winner is Rep. Marsha Blackburn (R-TN), who tried to claim days after Senate Republicans blocked the Paycheck Fairness Act, tried to claim on CBS' Face The Nation that 'Republicans have long led the fight for women's equality'.

Excuse me for a moment dear readers while I double over in laughter.

Marsha, Marsha, Marsha.  Stop lying.   You've far too often led the opposition to women's equality .   And coming from you, considering that you voted against the Lily Ledbetter Fair Pay Act in 2009 and said last year 'women don't want equal pay laws', it's an egregious one.

And FYI Marsha, the first five US women governors were all Democrats.