Don't Buy Where You Aren't Hired

One of the things we have been trying to grapple with in the African-American trans community is what is the best way to deal with the crushing 26% unemployment rate that ails our community .

While passing non discrimination ordinances is one way of doing it, there are just some areas of the country that isn't going to happen for them until a federal ENDA is passed or businesses start feeling the sting of adverse EEOC rulings or federal lawsuits for their anti-trans bigotry.

So what can we trans peeps do in the interim to get companies to do the right thing and hire trans workers?

Borrow a page from the tried and true tactics of the Civil Rights movement.   Hit 'em in the wallet.

There is this false belief in the trans community that we don't have much economic power.   Not true.   If we use it collectively and efficiently target it, we do have economic leverage. 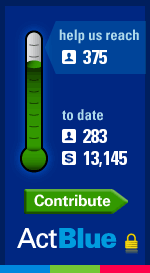 If you don't think the over $12K the trans community donated to the 2008 Obama campaign didn't get their attention or isn't one of the reasons the Obama Administration has been the most trans friendly presidency in US history, you are naive or haven't been paying attention.

Money talks.  Businesses who value our community know that diversity is good for their bottom line.  But there are some for whatever reason don't want us in our establishment of discriminate against our people who simply want to be hired and get a decent paycheck.

So it's time to bring back a tactic from the Civil Rights Movement era and remix it for the 2k10's.on behalf of the trans community.

Don't spend our T-bills where they won't hire us or treat us with respect and dignity.

We not only use economic boycotts to get companies to hire us, we also partner with organizations to have transpeople run undercover stings.   We do so to test these companies and ensure they are hiring our people.  And if they aren't, publicly embarrass them as was done in New York a few years ago to J. Crew.

They got busted in 2008 for not hiring transpeople despite having gender identity and expression language in their non-discrimination policy.   We can also use that discrimination data collected in these stings to press the case for adding trans people to non-discrimination laws in those areas without those protections.

So let's consider implementing this policy as soon as possible.   Don't buy or spend your money where they won't hire or respect you.
Posted by Monica Roberts at 12:00 PM