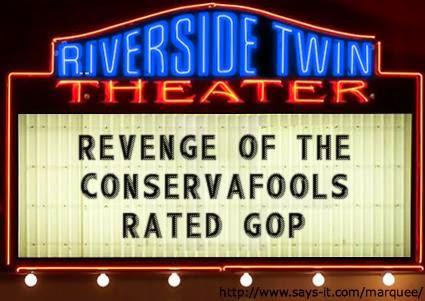 Because the conservative movement is pissed off a Black president got elected in 2008 and reelected despite their millions of dollars, loud propaganda and Massive Resistance 2.0 in Congress, they are taking it out on Black people and the country.

Conservatism is a failed political philosophy, and they can't win elections without cheating.

See them cut the social safety net! See them diss women and eviscerate a woman's right to choose! See them roll back voting rights! See them brazenly suck up to billionaires while hatin' on the poor. See them kill union organizing rights! See them refuse to raise the minimum wage while their obscene corporate profits grow.

See them lie on cable news and talk radio while doing all that shady crap. See them claim they have the support of 'The American People' while doing so.

See the horror of large numbers of stupid, racist tea bag holding bigots voting for them against their own economic interests as the 1% maniacally laughs at them from their quiet rooms.

Produced and directed by the Koch Brothers.

Time for this horror movie to end.  You can make that happen by voting to throw the GOP bums out on November 4.